I am shivering:  rabbrividendo, or tremante,  in Italian (let me look that up).  I believe the dentist used the rabbrividendo word as I sat in the chair, freezing, yesterday.  He wanted me to hold the cotton between my jaws as the filling hardened up, and my teeth were chattering.

It’s been a cold week here – it was at least 6 below Celsius this morning. Camilla at the café said minus eight, but a troubling customer insisted it was only minus six.  Like the difference between frigid temperatures Fairbanks and North Pole (minus 40 or minus 50?)...Some people can be so contrary.
Anyway, it was about 20 degrees Fahrenheit.   I find it hard to walk Harika in this weather, but in her sweater she could stay out for an hour.   She eats frozen grass -- green gelato -- and puts on the speed every so often to warm herself up.   When we lived in Branford, Connecticut years ago, she’d run into the sea every morning, and come out bearing icicles.  It isn’t that cold, but it’s plenty cold.

Now, I have had to go back and correct “Fahrenheit”, while this computer is busy translating every word into another language.  It has decided my name is hot pot, which makes me laugh every time I see it.   I have to shut off the machine and then turn it back on to get it to stop.  Of course, I’ve googled the issue and it seems to be a glitch in the program, which will hopefully be fixed next update.

Did I tell you about the portrait show we went to in Imola?  Maybe.   During these last two holiday weeks (today is the 12th day of Christmas, and I’ll be happy when those drummers make it over the hill and life resumes), time has flown by.   In any case, it was a wonderful show of portraiture, in painting, drawing, sculpture and digital arts.   It was a free show, put on by a foundation to help the children.  We bought the catalog we liked it so much.

It inspired me to make a sculptured head.  I had clay, and made a rather expressionistic sort of head, half size.  We’ve taken it to the sculpture studio to have it fired.   If it works out, I will make more, to use as hat racks, or otherwise just adorn the house with a happy look. 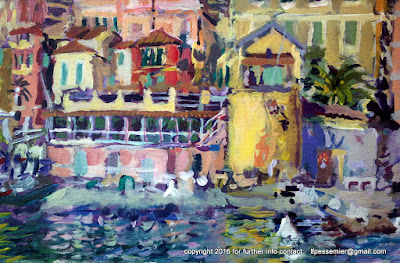 Bay Southern France (from winter trips past) Blair Pessemier  Acrylic/canvas  10 x 16"   25 x 40cm   200.00
​
In Italy, today (6 January)  is the Epiphany, the little Christmas when the Befana (a crone-ish character) leaves children presents in their shoe.   I love her story:   she wasn’t going to be following any “wise men” to bring gifts to the baby Jesus.  Later she saw the error of her ways, takes off after them, gets lost and ends up leaving the gifts for baby Jesus with the other children along the way.

ps.  on our way to Palermo, Sicily tomorrow

Posted by Laurie and Blair PESSEMIER at 4:39 PM