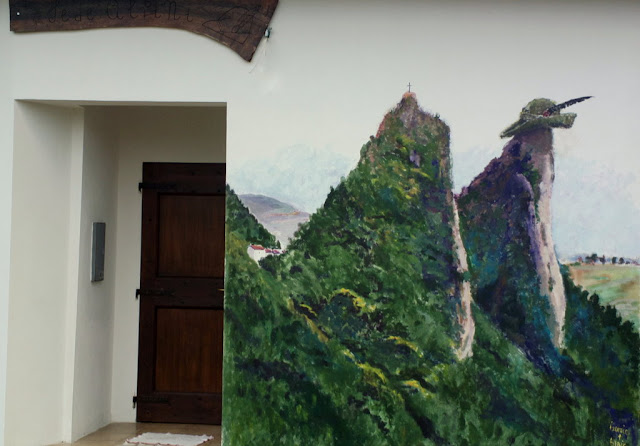 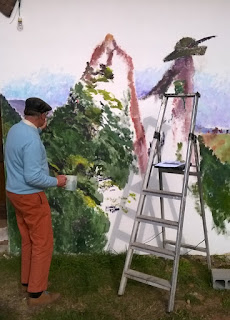 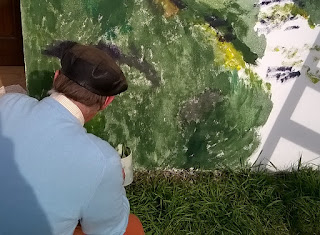 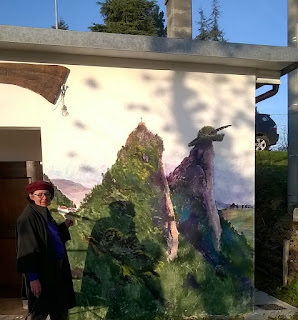 The mural, with me 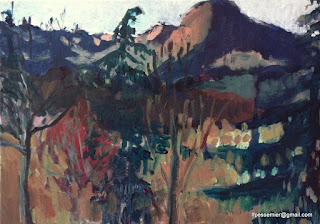 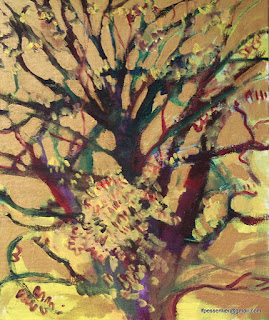 While walking Harika, a man we know in town motioned for us to “come over here”.  He went on to point out the white wall on the new clubhouse of the Alpinists. “A mural is what we need here”, he asserted.  The club’s thinking had, in fact, gone beyond that – they had an image in mind, the “Sassi”, the two big rocks which define our town, and the surrounding wood.

The Alpinists are a force here in the Apennines.  They were very active in World War II, and much action transpired in these hills.   They still get together, and have increased their numbers with the addition of local hikers.

Bob Dole, the former US senator, was a second lieutenant in the 10th mountain division at Castel D’Aiano (we went to lunch there on Monday, passing Dole’s monument), where he was seriously wounded.   It was thought Dole wouldn’t survive, but he did and was determined to do as much as he could with his remaining strength.  Dole was here, just ten miles from our house, in October 2015, to revisit his mountains. “This may be my last trip,” the 92 year old veteran announced.

We gladly agreed to paint the mural, if the Alpinists provided all the paints.  Blair went up on Monday and sketched out the design, in charcoal.  Tuesday morning we were in full painting form, and knocked out most of the picture that day.  The Alpinists decided they’d like their alpine hat on top of the mountain – which I gladly obliged.  “That feather needs to be longer…”

We loved painting outside, in public, once again.   A dozen people stopped by over two days to watch the progress:  sidewalk supervisors.  I was, myself, surprised at how quickly the work went.   Blair was the layout man, and I did the sky, the rocks, and the hat.   He painted most of the trees, although I made an occasional dab of green paint.  On Wednesday, we finished.

Harika supported us, dozing, chasing a cat and digging shallow holes in the clay, the same stuff that was on the playing fields.   She welcomed each observer.  An occasional coffee laced with brandy, a plastic cup full of homemade grappa, “the specialty of the house”, kept us warm.  I almost hated to see the project come to a close.

We’ve asked for a Christmas tree in return – if anyone can find us a nice 10 foot tree, these guys will.   As we signed our name on the mural, I told the president of the club, “we’ll be in Rocca Malatina forever now”.

Posted by Laurie and Blair PESSEMIER at 10:05 AM