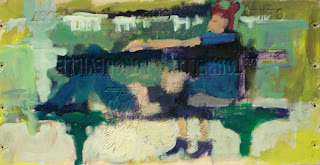 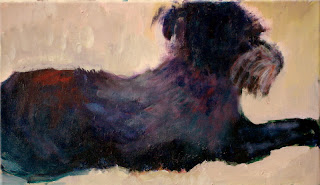 Our building is framed by neon eyeglasses on both sides.   Going up the hill toward Montparnasse is a pair of red round rim glasses; walking away from our building toward St. Germain are a pair of sea green pince-nez.
Blair is ordering eyeglasses online.  He went to the optometrist for an exam, and his glasses, here, will cost at least 560 Euros, or 775 US dollars.  We can get them online for $112.00.  But we have to measure his pupillary distance.  He wants to do it himself, but every time he looks in the mirror, his eye shifts.  He tells me how to hold the meter tape, convinced I am trying to blind him.  I tell him it’s 58 mm, he thinks its 62; we compromise at 60.
The man who made my glasses had me put clear glasses on, then made a dot where my pupil was and measured between them.  It is the tack we eventually take.
The glasses are such a good price I am thinking about getting a pair myself, although I have these terrific 60s frames.  With the mail-order glasses one must select an online frame.
While the bus was stopped on the way home today, I watched two men in the eyeglass store trying on frames.  One was a large headed big man, probably a customer, observing himself in heavy black frames.  The other guy, a handsome long-haired fellow was wearing a rimless variety, plucking frames from the walls.  I thought he had a universal head  that would look good in any frame.  That’s probably why they hired him.
There are lots of eyeglass stores in France.  Eyeglasses are covered by the country’s social security system, and in this myopic society everyone needs to see more clearly.  While contact lenses  prevail, I would venture everyone owns at least one pair of glasses.
Every occasional I paint without my glasses on – it is an interesting phenomenon.  Colors look brighter.  Sometimes I think my paintings are what everything looks like without corrective lenses.  It leaves a little to the imagination.
I believe Harika doesn’t see well.  She often barks at a baby carriage or a rolling suitcase, mistaking it for another dog.  She shies away sheepishly when she realizes her folly.   Her hair is usually in her eyes – a fine line between a sunshade and an obstruction.    Once a little girl asked boldly, “how does that dog SEE?”
I got a marvelous book from the library on eyeglasses.  Of course, it claimed eyeglasses were invented in Franc e (but did credit Benjamin Franklin with developing bifocals), and had pictures of glasses used by Louis XIV.   There were all sorts of interesting methods of using glasses:  embedded in fans, for instance.
I love to LOOK.  As the trees are changing, I see the many shades.

Posted by Laurie and Blair PESSEMIER at 6:15 PM