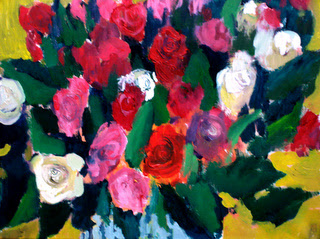 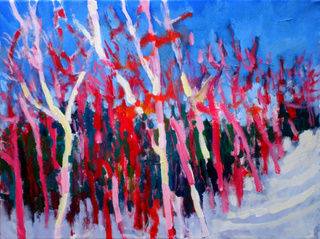 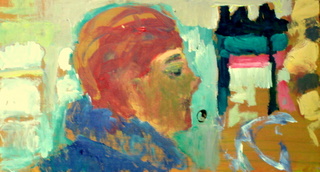 ARTNOTES:  Enduring Love on the Street

There have been “sales” this week, in Paris, on our street.  There are only “sales” twice a year, legislated by the government, of all things.  The street was packed with bargain-seekers, and a hobo.  This  man of the street, in his dingy, dirty clothes, was spraying all the finely dressed shoppers on the rue de Rennes with PERFUME!!!  He obviously found some perfume, perhaps from the tester at the “south of France” store, and was squeezing that bulb at the end of the flexible tube, and spraying passers-by.   He was delighted with this activity, smiling and laughing, and most people, focused on their next purchase, didn’t seem to notice him or the change in their personal fragrance.
He was laughing, the whole episode was positively hilarious, so we laughed too, and he didn’t spray us, or our dog.   This had some small sense of normalcy, a giant, silly relief from the maniacal actions of most consumers on the sidewalk.
I love being out on the street.  It was a perfect day in January:  maybe 60F degrees, and sunny.  The park was full of people – we left a luncheon so we could meet someone there at 3.  He never showed up, but it really didn’t matter because it was so nice out, we were still happy to be there.  I gave dog biscuits to my favorite dogs.  One woman complained of the crowd, but I pointed out how nice it was to look at everyone, so happy.  Sunshine brings out the best in people and dogs.
At le Fumoir, where Y and I were painting on Friday, a handsome man and his pretty girlfriend took the table next to us, on the sidewalk.  They photographed each other, and when Blair arrived, he offered to take their picture together.   I painted a building on the rue de Louvre, and a couple of guys drinking coffee.  As I started brushing in  the redheaded lady a couple tables away, the handsome man at the table next to me said, “hey, that’s a nice picture, do you think you could paint me and my girlfriend from this photo?”
I told him I could, and we met the next day with my computer to download the picture off his digital camera.  The day was cooler, we met inside, and he asked if he could have two pictures, one for him, to take back to Australia, and one for his girlfriend, who was returning to Croatia.  Blair negotiated a fee.
We delivered two pictures (one by Blair, one by me) on Tuesday.  We neglected to photograph them.  The couple were positively delighted by the two small works and we wished one another best luck and to meet again.
On the way home, crossing the Pont des Arts, my eye caught a particular lock .  Couples attach locks to the grillwork on the bridge, and throw the key in the Seine, to commemorate their enduring love.  This purple metal lock read “Ben and Sonja 2011”, the subjects of our paintings.
Posted by Laurie and Blair PESSEMIER at 11:15 AM