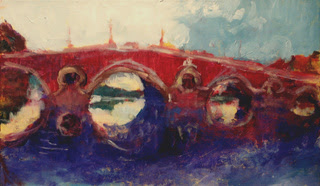 When I think of Toulouse, France I always think of “burning at the stake” or “auto-de-fe” (which actually means act of faith, but to English speakers has come to represent a fiery martyrdom).  Toulouse is where the Cathars are from, and where they were burned at the end of their run;  the same fate befell the Templars.  Toulouse was pretty much headquarters of the “medieval inquisition”, and big burnings took place downtown clear up until the 1500s.  Burning at the stake, for me, is right up there with stoning or being dragged to death by an elephant.  It was with these thoughts in mind,  I flew  to Toulouse to fill in at a business appointment Blair was unable to attend.
I arrived well in advance of the meeting, and I drank coffee with Blair’s boss, R, at the Radisson.  The caffeine ratcheted up my fears about my performance, but somehow a shot of whiskey seemed inappropriate in the morning, especially with the boss.   We met our customers at noon, walked across the street for lunch and enjoyed a lively exchange with them over hotel food.
Toulouse is home to the aviation industry in France, and much of Europe.  Airbus is located in Blagnac, a suburb of Toulouse, surrounded by engineering firms supporting the aerospace industry.  It made me think a little of Seattle with Boeing, and Microsoft.  I love the businesses that spring up all around – some of my fondest memories are of start ups in Seattle, successful and otherwise, that so many of my friends worked for.
We took a cab downtown to R’s hotel.  I sat in the lobby with my email while he checked in.  I chatted with the girl at the desk, got a map and some pointers for what to see in Toulouse.  We started our walking tour, first stopping at the famous Basilica of St. Sernin, which happened to be open.   Constructed in the late 1000s - early 1100s, the Romanesque basilica is part of a pilgrimage route.   St. Sernin was an early Christian martyr, dragged to death by a mad bull through the streets of Toulouse in 257 CE.
It wasn’t only the burnings that set me off the city of Toulouse, but Blair spent significant time in the hospital there in 2003.  Whisked off in an ambulance from a painting vacation on the canal de Midi, he spent weeks in an un-airconditioned room with pigeons perched on the (open) windowsill.    I spent daily vigils there, with our house rental supplies and four cases of wine in his hospital closet.  He took a medical flight back to the American Hospital in Paris, and I drove our rental van, which I filled with unleaded instead of diesel fuel.
We pressed on, another church, a sidewalk café, the remarkable Capitol square, and eventually to the banks of the Garonne.  Several bridges span the Garonne;  one, the Pont Neuf Toulouse, is now my favorite bridge in France.  Its arches are not symmetrical.   Between the arches are large oval openings intended to resemble the mane of a lion:  these permit the rising waters of the river to pass through the bridge without knocking it down.    The sun was shining and the light was outstanding.   Our march continued by an old “mill” on the river, once the largest in France, and we walked by sensitively-renovated buildings.    As the sun set, I boarded my bus for the airport hotel.
Blair arrived late that night, and the next morning we retraced my steps of the previous day, adding a few new highlights.  I felt completely different about the city of Toulouse, and was happy my act of faith was a positive one. 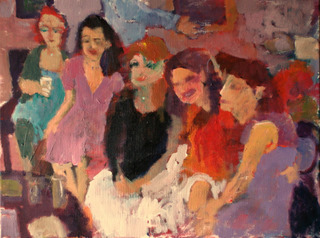