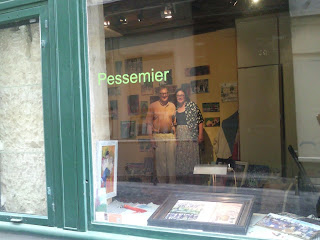 
In January 2013, I answered a question:  what stands between you and success?  My response: exposure.  So we rented the gallery at rue Servandoni, in earnest.   At the end of July our term is finished, but now I see 100 other ways to keep up that exposure.

Leaving Servandoni is a bittersweet event.  Our studio/gallery is really the first one we’ve had in Paris.  In the overall, it was a success:  it increased our exposure, we could always pay the rent and we made a little money.   On the down side, going in every day at 2:30 kept us from some painting opportunities we’ll never have again.  I can’t say I enjoyed time spent there.

In the park, I notice gestures of people seated all around.  A man, of a certain age, dressed in white, dusts off his chair seat with his handkerchief before sitting down.    An Indian man extends his arm in that way which Indians do, shaking off a scarf, a loose fitting sleeve.  A Chinese man sits, legs crossed, smoking a cigarette between his thumb and index finger    I see all these delightful gestures I could commit to painting, but there is no time – we must go to the gallery

The dilemma is to find the right mix of gallery and painting time.  It must be realized without spending too much money or becoming too serious.  It might finally be time to implement the Sunday salon:  “Only on Sundays” .   It would be like a living “artnotes” – with the paintings of the week displayed, among others.  I could even possibly enjoy it, one day a week.


I had delightful workshops this week, with two women from Hawaii, so positive about painting together  at Giverny.   It poured as we left Paris, but it was clear at Monet’s gardens.   We visited the  Giverny Museum of Impressionism, and were influenced by the show of Hiramitsu.  One painter was dark and moody, I was flat and simple. The two painterswere educators  dedicated to teaching via the path of observation and art.

“What will you DO?”  People ask as we are starting to dismantle our studio/gallery on rue Servandoni.  “The same thing we always do,” I reassure them, “paint pictures, give lessons, sell paintings”.  Only better.

Posted by Laurie and Blair PESSEMIER at 6:51 PM