Artnotes: A Walk in the Woods 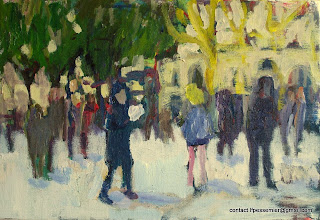 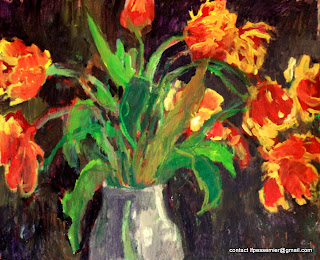 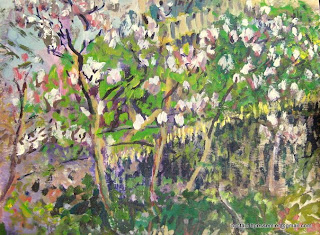 Artnotes:  A Walk in the Woods

I found a large tuft of platinum blonde hair (I hope it was just an extension), and a cheap gold hoop earring.  An inexpensive handbag was thrown in the bushes, with nothing of merit inside.   I pocketed a kind of nice madras plaid hat which I’ll wash and use for summer.  I’d been looking for a new painting hat.  Blair isn’t keen on  it, but I can see the potential.    We were on a walk in the Bois de Boulogne this spring Sunday  morning.

Harika was also on the hunt – there was evidence of rabbits and moles, which she sniffed for, to no avail.  Finally, she came upon the strangest of prey:  a football sized prickly mass that simply would not move:  a herrison, or hedgehog.  I am sure she never saw one before – growling at it, jumping around it produced no response.   Blair thought it was dead, but I pointed out it was very successfully “playing possum” – it did wriggle when he gently poked it with a stick.   It was a find we were all happy with:  Harika, the great huntress,  obviously subdued it, and we didn’t have to worry about blood.

We were in the woods because we have a rental car: a big van-like contraption so there’s room for our painters and paints.    Our painting workshops begin in earnest this week – on Monday we will paint like Monet in Giverny, and on Tuesday we’ll be alongside Van Gogh in Auvers-sur-Oise.  I believe I am the most enthusiastic workshop participant – I can’t wait to go.

We’ve passed the cusp of frigid winter – now it is frigid spring. A mere 50-something degrees Fahrenheit (13 or so Celsius)in the morning, but sunny.  It is my favorite time of the year, with the introduction of green leaves but not the full, shade-producing cover.  It’s all about light and dark, or light and movement, which brings me to the show “DYNAMO” which we went to at the Grand Palais this week.

At first, we thought the show was in the big glass-covered Palais, so we didn’t get there until after dinner, 8:45 or so – in fact, DYNAMO occupied huge space in the official gallery side of the Grand Palais – it was nearly  40,000 square feet!  It was too much to get through in an hour, but I had the sense of being in a 1960s wild, hypnotic, spinning wheel  atmosphere as urgent-looking guards would say, “you’ve three large rooms to go!” Like Patrick McGoohan in “the Prisoner” I had to make it to the outside by 10PM.  And EVERYONE was so HAPPY at the end of the show – smiling attendees who just didn’t want to leave.

Classic artists like Vasarely, Agam, Flavin, Turrell opened the show.  But there were also people I was not familiar with, including Carlos Cruz-Diez who created big rooms of light produced color.

It made one think about art differently:  not painted on a canvas, or sculpted from a block of wood, but our participation was required to make it be art.  I would call the show a blockbuster just for the fact is was so different, so thought-provoking.  I liked it very much and will go back to look in greater detail.

I sat outside the gallery in a chair this week, it was so warm. On Saturday,  I was painting outside with Harika at St. Sulpice.   A crazy woman in apparently normal French dress appeared with her dog, a shepherd of somesort,  and a big playground ball.  She throws it up in the air and the dog bats it back with his nose.  There are about 100 people in the square, I am sitting on a bench.  Several people are hit by the ball.   Harika is having a nervous breakdown – for her,  we may as well be in Syria – the sky is falling!  She hides under the bench.     As I am painting the trees, the ball bounces off my very wet paint-filled palette, onto the painting.  The woman doesn’t apologize, makes some comment like it is my fault.  She must need the attention or just  a walk in the woods.

Posted by Laurie and Blair PESSEMIER at 5:49 PM