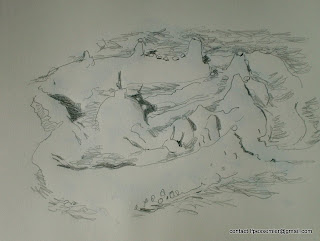 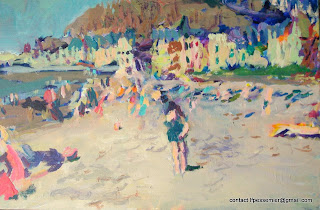 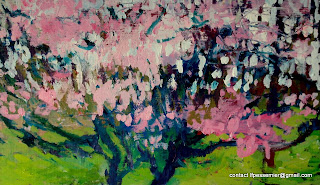 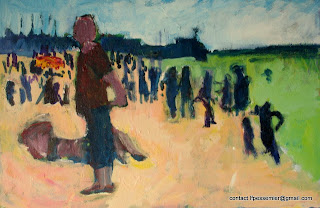 I felt like Paul Bunyan in the desert this morning – we were walking on the beach in Trouville with Harika, observing sandcastles from the day before in various states of ruin.  Is that the Ishtar Gate?

On Sunday the sand was packed with families of all ages and mixes, having fun on the beach.  I enjoy the increasing cultural diversity in France.  It used to be I was the odd ball in Normandy, with brown eyes.  Sunday we sat beside a Russian/Chinese couple with two French children.   The daughter staged a coup on someone’s abandoned sandcastle, built by two English girls.  A woman passed by in an Arabic dress, black with bright pink sport stripes down the sides.

People ask me, isn’t it too crowded?  I LOVE all the people, at ease, in various stages of dress.   I also like the beach without people, when we can see forever.   This morning was clear and blue, the sky reflected in huge puddles the tide had left as it receded nearly a quarter mile.     We picked up shells and rocks.  I found a piece of corroded iron that looked like the nativity, but not quite enough.

Harika barrels along like Babe, the blue ox, knocking over castles and hiding in the moats.  Some are large enough that she can disappear in the hole entirely.  Her friend, Milou, the restaurant dog, pees on the tower.
Razor clams make great crenulations.  One fort incorporates a human sized chair lined with razor clams – it is impossible to capture in drawing, especially after being routed by Harika.  There are entire villages laid out, in square, round and kidney shapes.

And, it’s finally warm enough to sit ON the beach.  Harika sunbathed as we painted and the rest of the world real and imaginary, played.
Posted by Laurie and Blair PESSEMIER at 6:42 PM