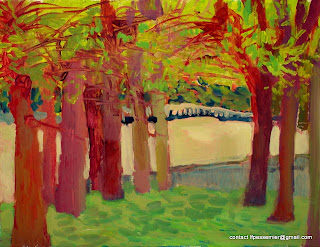 
Harika ran around in circles, rolled in the grass, jumped in the air when we got to Giverny on Monday.   She doesn’t  care about the gardens, where she’s not allowed, but loves the air, the happy tourists, the smells of nature. 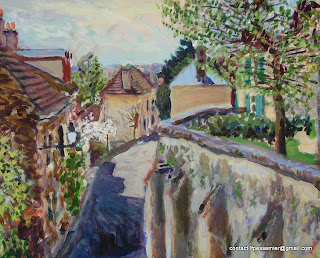 Friends from Tunisia stopped by last Sunday.  They brought a sugary dessert and a tanagram game. We’d not seen them in nearly a year.  “There’s a brocante (yard sale) in our neighborhood,” they announced.  “If you’d like to come back there with us.”  We had a rental car that day, so we all piled in and drove to Maisons-Alfort.  They were impressed with our rental van – a new Volkswagen model, with a retractable roof and wind baffle.  We used the GPS.   “I sure wish they had GPS in Algeria,” our passenger commented, “we’re always get lost there”.  I had visions of driving through the desert, plugged into a satellite.

The sale was enormous, covering four large streets, crossing in the center.   We were in the market for vases and flower-y paraphernalia for our “He loves me, he loves me not” show coming up at the gallery.  We found vases galore, for one, two and three euros.  Blair bought a 1960s flower embroidery, framed, for the Retro gallery downstairs.  I got a marvelous umbrella, dull puce on the outside, but filled with flower print on the inside.   We came away with a giant haul for twenty euros.   And best of all, it was unexpected.

The flower theme was the perfect setting to our week, with a trip to Giverny on Monday.   We had two painters who had spent the weekend out there, and painted with us Monday afternoon.  They were thoughtful painters, who studied exactly what they wanted to paint that afternoon:  both chose the bridge across the water lily pond. 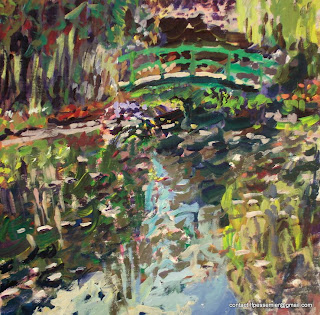 It was the earliest I’d been to Giverny to paint, in terms of blooms:  the flowering trees, the pansies, and tulips were out.  I picked one scene outside of the park with apple blossoms and soft green grass.   The next day we went with an Australian woman out to Auvers-sur-Oise, where she completed a nice painting of a Van Gogh street, and we painted around her.

Harika loved that trip, too, spending the entire day lounging on the grass, save for lunch, where she regaled with the regulars at a traditional restaurant the proprietress had been running for 52 years. When we entered the restaurant we asked if Harika could join us.  “Excuse, me, “ the owner announced, “does anyone object to this dog eating here?” 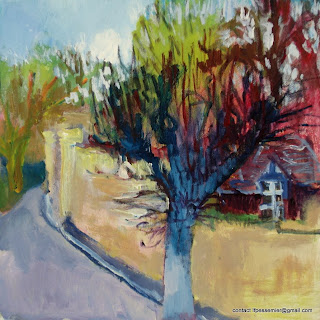 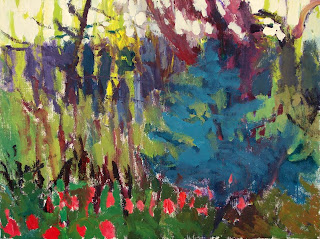 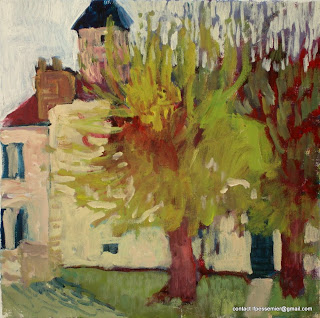 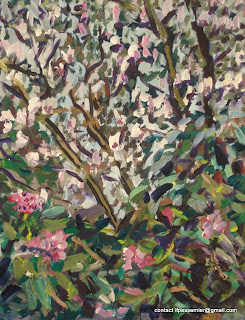 Posted by Laurie and Blair PESSEMIER at 10:35 AM