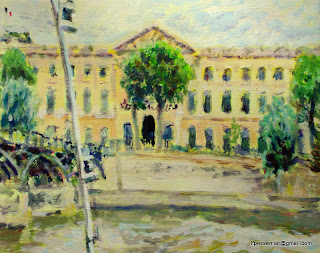 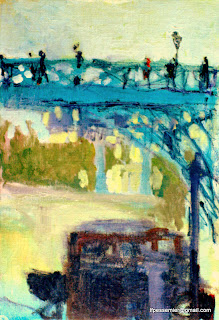 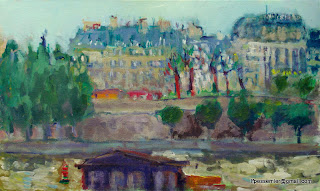 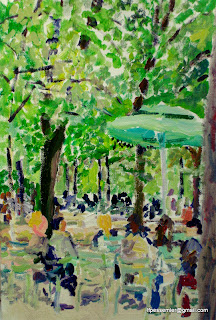 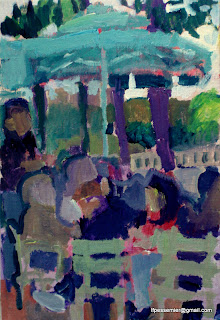 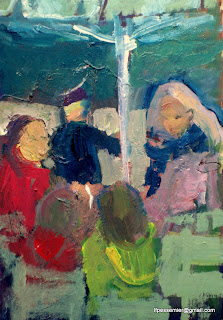 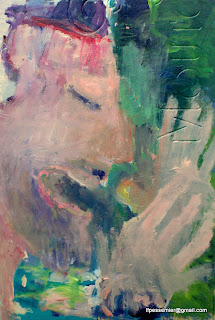 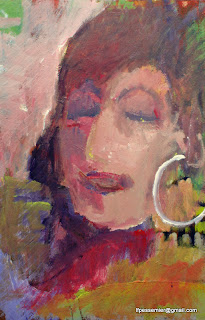 ARTNOTES:  Moments from the heart

“I used to be a painter; I guess I am a failed painter,” the tall man said.
“You can always go back to it,” I said.
“No, it is an act of love, and one can never go back to a failed love affair.”

Such is the philosophy delivered in a sudden rainstorm, in the garden this morning while we were walking Harika.  We made for cover in the pavilion.  Pyra and Atlas, Christine and Canaille stayed for a short while, eventually braving the elements for home.  We stayed on, as different folks arrived and left.  Among them were a man reading a religious text, a man afraid of dogs (big mistake), and a man from Kashmir who Harika at once fell in love with.  She spoke to him in her ooo-aaaa-ooo-gggrrooo voice.  And we fell to talking with him as well.  Finally, he said he would be more comfortable in English than French, and it was then he told us he was an artist.  Now he would like to be a fisherman.

These are the moments in life I look for, when a universal truth emerges.  Maybe it isn’t universal, or maybe not even true, but it is a statement spoken from someone’s heart.  Thought provoking.  It’s a step beyond discussing the weather or someone’s last vacation, or Harika’s comportment (or lack thereof).

This week we had an art session with a woman celebrating her 50th birthday.  Her daughters paid for her lesson as a gift – she loves to paint, and they would be in Paris.   She undertook a 20 x 30 inch canvas – the largest anyone has ever painted with us.  They were from England and not subject to the same baggage restrictions our American colleagues  face on the airplane.  We met her on the Pont des Arts, which she later painted from the quai below, complete with her family standing on the bridge.

The lesson had a rocky start.  A Jack Russell terrier fell (or jumped) from the peniche docked in front of us on the Seine.  It was a regular occurrence, judging from the large hook they had for retrieving him from the water.  The water police were called, but he was extracted before they arrived twenty minutes later.

Meanwhile, his cohort in crime, a chocolate lab, saw this as an opportunity to escape.  He immediately came over to our painting site, knocked over my easel, palette and coat, walking through the paint, then on  my coat, which will never be clean again.  He was impossible to control, so Blair threw a stick onto the peniche he came from.  He obliged and ran to the boat, traipsing pthalo turquoise and primary magenta all over his master’s vessel.  The fellow gave up looking for the Jack Russell, and started screaming about his BOAT (you know how boat owners are).  No apologies to us, just hateful glares while I smiled.  Comportment!

We revived, and I painted two paintings, while Blair rendered the Louvre in shades of yellow.  A few drops of rain fell on us that we three refused to acknowledge, and eventually the sun shone.

We’ve really enjoyed painting with others again  – even in the rain.  A week or so ago, I painted the lily pond at Giverny in the rain, in the spirit of the Japanese block print.  All weather can be good.

Posted by Laurie and Blair PESSEMIER at 12:05 PM