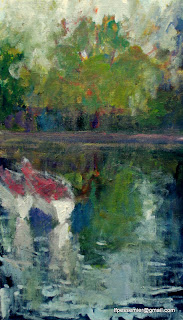 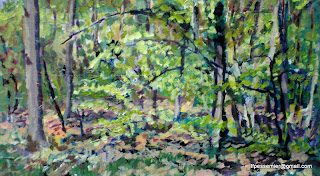 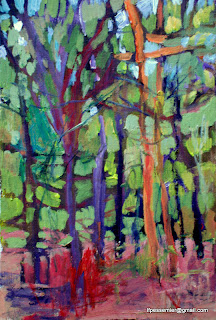 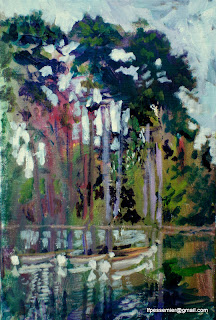 
We had a rental car in Paris this week, so we decided to take a trip to Fontainebleau, in the spirit of so many impressionist painters.   Our initial idea was to paint “rocks” – a unique feature to the park.  We invited a friend, who suggested we make a sidetrip, which actually became the focus of our journey.

We visited the home of Stephane Mellarme, a French poet born in 1842.  His work is among the most difficult to translate into English – when I read it in French it is wonderful, but to put in English just doesn’t “go”.  He worked as an English teacher, to make ends meet; he translated Poe’s Raven into French, where it was illustrated by Manet.    Mallerme had an apartment in Paris, and the cottage we visited, in Vulaine- sur-Seine, on the banks of the river.  He was a “connected” artist – he conducted salons attended by  Degas, Manet, Whistler, Poe, Yeats, Rainer Maria Rilke, Paul Valéry, Stefan George, and Paul Verlaine, just to mention a few.   His portrait in an etching by Gaugin, hung on the wall of the house we visited, alongside a photo taken by Degas, with Degas reflected in the mirror.    I felt tremendously inspired to get my Sunday salon underway, something I’ve been trying to do since January.

The house was filled with interesting pictures, his furniture (he is associated with his rocking chair, wearing a plaid blanket over his shoulders) and a small show of his work and accompanying illustration.  He wrote some of his poems on fans, intended for his wife, mistress and daughter.  The gardens were marvelous, and he even wrote poetry the wall of the privy.

We’d brought a picnic to eat, and afterward ate  on the banks of the Seine, with Harika.   We saw a very large bird winging our way, “a heron”, I announced, but it was in fact a swan.   The gigantic bird landed on the water by running on its enormous black feet,  loud slaps on the water.  It was clearly interested in our lunch.  Harika had no intention of sharing, and eyed the bird menacingly.  As the two got closer, the fowl took to hissing, and having had enough, Harika jumped in after it.  I had to clamber down the rocks to haul the wet dog out of the water, but it succeeded at putting the bird at bay for a short time.

The sun was warm enough we took of our coats and shoes and dangled our toes in the Seine.  After chicken and remoulade, carrots, cheese and bread (with wine, of course), we packed our bags to be off to paint.

It is quite amazing how large the forest of Fontainebleau actually is:  an area of 110 square miles!  We opted for a little turnoff by the road, where the trees seemed illuminated, pale green and yellow.   Blair sat down at once, and our friend, Harika and I went further into the woods, where cars were barely heard.  I painted the illuminated trees.  There were no mosquitoes yet, but lots of little insects.  Two of the king’s horses passed by (the police, on the trail of prostitutes), and we found a rock which resembled a large chunk of ice.   I picked it up for a souvenir from our foray into the country.
Posted by Laurie and Blair PESSEMIER at 2:24 PM