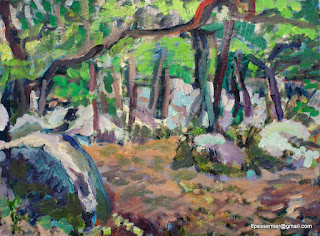 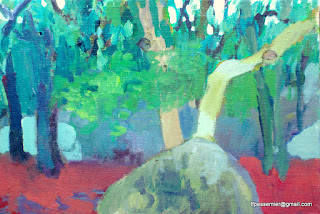 
“Are  you going to park that car right THERE?”  I asked a man directing a friend to drive the car between me and what I was painting.  If looks could kill, well, I’d rival Mao.

“We’ve got a broken ankle and we’re packing her out of the forest”, he replied.  I tucked my tail between my legs and said, “oh, sorry”.

Blair and I were out at Fontainebleau again, this time painting boulders.   It’s one of the most remarkable parts of Fontainebleau – the landscape is strewn with enormous rocks, like giants were playing boules.   On closer research, I discovered that Fontainebleau is noted for the best “bouldering” (boulder climbing) in the world.    This accounted for the far away license plates in this busy parking lot, and the fact so many people seemed to be carrying massage mats into the forest.  It wasn’t romance, but a soft landing pad if one were to drop from the rock.  In today’s case, not soft enough.

It took a bit more digging to find out where those rocks came from:  in a  word, SAND.  The earth at Fontainebleau is sand (something Harika really likes and it makes walking there delightful) because there were oceans there at one time.   The oceans receded, and wind created ripples, later covered by water, then limestone  –  to make a long story short, these are sandstone boulders from a prehistoric era.

Speaking of GIANT, we went to the Monumenta show in the Grand Palais this week.  For those who are not familiar with the building, the Grand Palais is a glass-roofed, belle-epoch building from the turn of the former century.    It is so huge inside, there was once a zeppelin in there; and an airplane.  Ferris wheels and roller coasters are regular occurrences.  Once a year, an artist is selected to create a work which suits the place.  This year, the artist is Daniel Buren, known for the striped columns at the Palais Royal.  This work of his in the Grand Palais is much better.

One enters the Grand Palais for this installation from the far end.  The feeling is immediately that of a kaleidoscope – a psychedelic assault of green, blue, orange, yellow.   Circular lenses of color tint the floor below:  people look best in the red or yellow, the green colors clothes, the blue makes cool.  I loved the exhibit for the fact it worked equally well from below, center, above.   Blair commented that from above it had the sense of water lilies on a pond.

The colored disks are a bit like tables, with legs and a ring supporting the transparent colored center – the members take on the color of the disk, reflected on black or white.  I really had to go up to them to be sure they weren’t just painted.   Each of the tables, or lenses is probably 20 feet in diameter, some more. some less, always round.

Everyone seemed to be enjoying himself – kids love it; even crabby old folks like me linger a long time beneath the colored atmosphere.   We stayed for more than a half hour – everywhere I looked something else caught my eye.  That’s a successful artwork.

We’ve had a run of wonderful things to see.  The rain has kept us inside more than we’d like – last week we only got outside for two paintings at Fontainebleau.  We’re trying hard to find a studio to paint in, but the cost has been colossal.   Meanwhile,  I am charging my battery of inspiration.

www.parispaintingworkshop.blogspot.com
ps.  we're thinking of adding a day long Fontainebleau/Barbizon trip to the painting workshop -- sign up now!
Posted by Laurie and Blair PESSEMIER at 3:56 PM