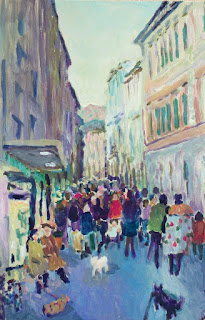 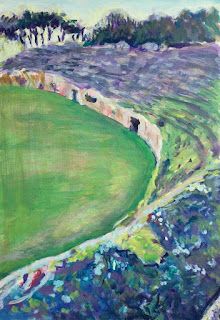 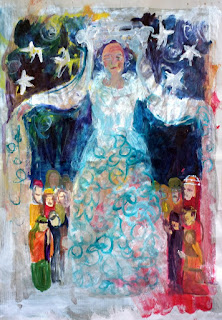 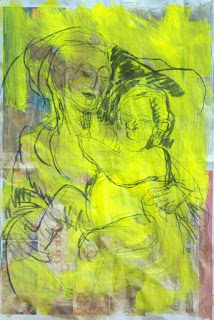 I finished the first draft of my Madonna catalog.  I am still painting (and drawing) away on that subject, but my Italian language study has taken a back seat.  I am constantly thinking about the Mary project.

We studied Italian our first week of 2019 in Stimigliano, with Mario, who used to be an honest-to-goodness teacher, but I just didn’t have the mental energy to give my 100%.  Why was that?  Because a huge amount of my time has been spent with my art.

Blair’s been painting again, and did three great paintings this week.  We are seeking further subject matter, and drove to Sutri, an ancient town not far from here.  It was suggested by Raimondo, who is a woodworker in Rocca Malatina:  he comes from Sutri, originally.

We were not disappointed.  It is a pre-Roman site, with a fabulous amphitheater, and caves and graves carved into the tufa stone. There is an ancient church carved into the rock, dedicated to Mary and the Birth.    But before it was a Christian church, it was a Pagan temple where Bulls were sacrificed.   The church interior is on an upward incline toward the Altar, where ultimately mass was said, but for centuries prior, bulls were slaughtered (and things ran downhill).  There were multiple layers of frescoes, some adapted to the “modern” dogma, but strategically incorporating bulls.  It was most interesting.

I woke up this morning thinking about how difficult it is to do more than one thing at once, and do it well.  I can paint and write, or study Italian.  I can work on the computer or I can be creative.  Some tasks, like cooking dinner for friends, can be ok; others, like learning a new computer program, is  just too alien.   It is difficult to accept that I can’t do everything.  As an American, we’re taught we can have a half dozen “jobs”.  In fact, it is hard to do justice to any one, when there are too many.   When Blair and I had our architecture/design business we hardly painted at all.  When we were selling Thomasville furniture in Europe, and painting, the art eventually took over.    It’s not that there can’t be a lot of things, they just must be taken in order, and given full attention.

This idea has been further reinforced by my friend, Y, who I speak to once a week in Paris.  She has a business coach now, and she shares a lot of the information she’s been getting.  The coach told Y to forget she is supported by her husband, that she needs to earn enough money to support herself.  She needs to totally dedicate herself to her business:  100%.   I initially fought this idea, but when I think about trying to do too many things, I believe it could be right.

Meanwhile, I power along with as much as I can:  picking, choosing, and finding harmonious projects.

Posted by Laurie and Blair PESSEMIER at 11:39 AM