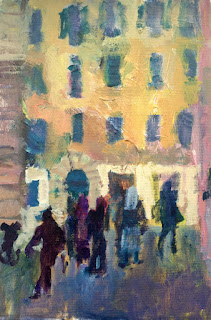 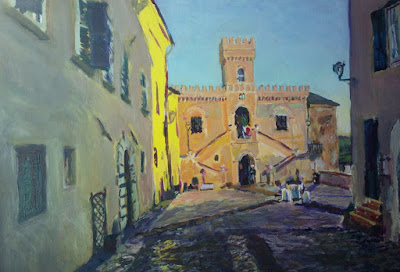 
I just can’t go another week without Artnotes.  Last weekend, I made a spur-of-the-moment trip to the US to see my Dad.  I was talking to him on the telephone (we chat every day), and thought “it’s time for a personal visit”.  So, a 72 hours later I jetted on over.  I loved the Boeing 787; hated the staff (like prison guards) on Norwegian Air.  I think airlines should let you have a free glass of water; I actually paid $45.00 extra to check a bag and have food, but water was not included.  We were delayed an hour both ways.  Baggage came in on a carousel shared by 8 other cheapskate airlines arriving at the same time.  Was all this worth the $500.00 savings?  Maybe.   I could do it again.
A couple of days before I left we went into the city of Rome, to buy parts for a crazy Christmas card idea we had.  Very few cards were actually made, so here’s the concept in the likely case yours didn’t arrive.  I made another card, which nobody received, I will share next time.

Rome is so fantastic I can hardly stand it.  Blair and I drive (although we could take the train), and park under the Borghese gardens.  Popping out there, right near the Spanish steps, is wonderful.  The park is so Roman, with umbrella pines and Renaissance sculpture, I feel joyous at once.  This time we walked DOWN the Spanish steps, over to the Pantheon, which is so emotion-evoking, I want to burst into tears at this 126 AD wonder.
And I know this is a “tourist attraction”, but darn, it is so great, how can I pass it up?  It’s how it got to be a tourist attraction, because it is so exceptional.  The key is to see it off season.  Winter sun bounced off the inside of the dome.
We went to lunch at a little restaurant where I ate the best artichoke of my life.  I was somewhat concerned when the waitress took two artichokes from the display up front – my experience with artichokes is LOTS of cooking is necessary.  In fact, it returned rather quickly:  it had been fried.  The outer leaves (minus the pricker), were like potato chips, and the interior was fabulously soft and delicious.  I followed with a simple spaghetti carbonara and wine.  It was a family restaurant, as so many in Italy are, and the woman taking care of us was the spitting image of the old man manager.  They were matchstick thin, with high cheekbones and enormous eyes.   Hearty discussions were taking place not far from us – it felt like eating at someone’s house, someone Italian.

​
I am just back yesterday, so paintings are a little scarce.  Connecticut was cold and snowy and I didn’t paint at all.  Blair worked on our house while I was away – he bought a beautiful olive wood table we’d seen the week before.  Harika waited every day in the car for Blair to pick me up.  Her wish, and mine, eventually came true.