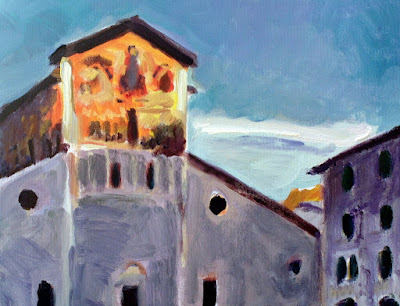 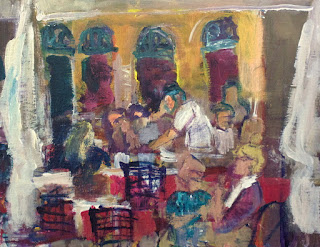 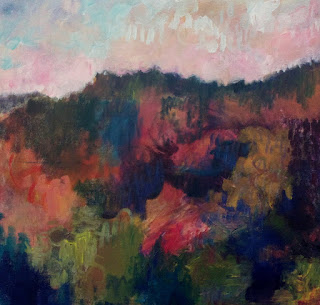 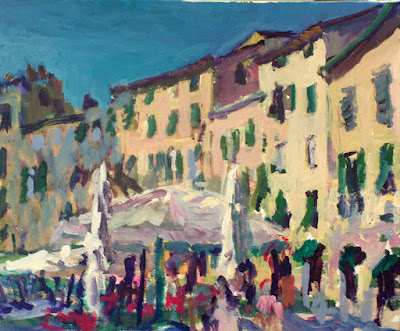 “I am going to be in Lucca, Italy on the 27 of October, can we meet there?”
Lucca is about 2 and a half hours from us – there are a couple of routes possible:  as the crow flies over the mountains (the roads look like spaghetti), or to Bologna and a bit more than an hour on the highway.  We drove the Bologna way in the fog.   A friend beckoned.

Blair has always wanted to go to Lucca, and I always want to go ANYWHERE.  It was beyond our expectations.   Lucca has an important claim to fame:  a medieval wall, which was rejuvenated with trees and plantings by Napoleon’s sister, completely surrounds the city.    We walked a bit around the 3.5 kilometer route (Harika wouldn’t go all the way), and putting the pup into the mobile unit, we walked around the fabulous city.   Churches, of course, and marvelous Renaissance buildings abounded.      For us, another key element was the second century Roman amphitheater that had been renovated in the 19th century to serve as a marketplace:   we sat down and painted.

We met our friend later than anticipated, so we had time to make a couple of paintings in the square.   It wasn’t an unobstructed view because there was a world-wide Comics convention taking place this weekend (“yes, we have parking”, the hotel clerk said, “but I’ll take you to an outer lot – there will be 250,000 people here tomorrow and you’ll never get out of the center).   The city was quiet on Thursday night – we met up at an outdoor café with K and five other of his friends.

Before you knew it, we were all friends.   We didn’t necessarily have common interests, but we were all what I refer to as “DO-ers”.  One man was a film maker and his wife raised money for alternate energy: the German woman explained difficult subjects through cartoons, her husband was a musician (Lucca is Puccini’s city, by the way) – we all worked passionately at what we loved.   Our friend has a vitamin company – which encourages people to do what they are compelled to do in life.  The group was in Italy interviewing individuals who lived with passion.
​
We drove back on the spaghetti roads – past Pistoia and up through the hills.  We had Italian class on Friday night.  I also needed time to process all the input I get.

On the way to Italian lessons with the refugees, the sky is a cold pink, the trees a dark mass with red and orange touches.  The refugees, particularly the men, only look to the future, which is why I think I like them so much.  They are spending their first winter in very cold northern Italy and we are bringing them wood we bought last year, but never used.

Our class this week has been about planning a trip to the countries we come from.   Blair took us to San Francisco last night, and Tairo took us to Mali the class before.   Friends are bringing Indian food to our table on Saturday, and I think, what a world!


Posted by Laurie and Blair PESSEMIER at 8:33 AM