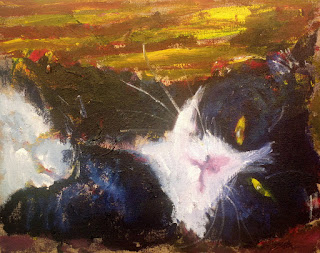 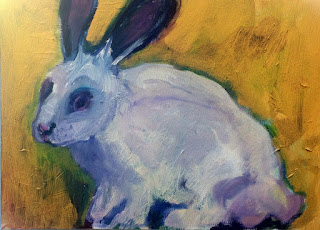 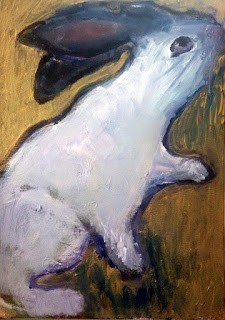 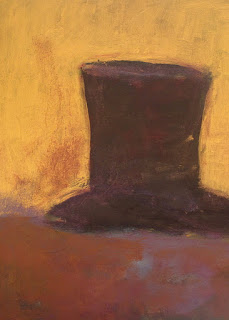 A Greek-Cypriot-Brit who we worked with in London would say:  catching the rabbit isn’t so difficult, it’s holding onto him that’s the thing.  This was an analogy for finding work and keeping it, as well as commentary on his early life in Cyprus.  This was the case with Ludovico and the white rabbit: he had him by the scruff of the neck, and tried to stabilize his legs.  Luckily, we got the fellow down to the grassy part of our yard, and boom, the cage was placed over him.

I really wanted to paint the rabbits.  I’d hoped to paint a large canvas of a group of rabbits, but based on this experience with one, it seems I might have to depend on photos.    Ludovico, our caretaker, has many rabbits, but the idea of all of them in the yard is impossible.   I think they must know their ultimate fate, and routinely plan an escape.   The chickens, on the other hand, run free, and miraculously stay out of the road.

We’ve been having a casual show of paintings here at our house.  It’s an excuse to get together with people we know, eat cookies, drink prosecco (THIS is the best one I have ever had), and sell a painting or two.    We had a dozen guests on Saturday, and plan on more today.

The Castagna (Chestnut) festival is going on today in Rocca Malatina.  Chestnuts are significant here:  they were the staple of a farmer’s food before the turn of the last century.   Most farmers worked the land on behalf of their landlords, and were required to surrender 70% of their production.  So when little vegetables were left for them, chestnuts became their bread.    It wasn’t until after World War II that things changed:  farmers went into town to work, and farms, at least here, were less common.

We live in the “working” part of Italy.   Ceramics, cars (Ferrari) and motorcycles (Ducati)  are made within 50 kilometers of us.   It makes for a fairly happy population who have enough money to buy a painting from time to time.  I do a lot of work here, too: now that summer is finished, I’ve been sewing (a new hat) and putting up fruit and vegetables.  I’ve learned more about how to fire my terra cotta figures, thanks to a woman who came to our show.

Someone asked me if I get nervous having people come to the “mostra”…  I had to think about it for a minute, because I used to go bananas with anxiety when we had a vernissage in Paris.  Here is more like just inviting people in – it is a much easier crowd.   And friends bring their friends – which greatly increase the chances someone will relate to my paintings.   There are many people who like my work, because they like me, or like Blair’s work because he really captures the feeling of Modena or a Paris waiter.  But it is a rare and special situation when my heart, my work, touches someone else’s heart.   I had that happen yesterday, and am thrilled to the core.


Posted by Laurie and Blair PESSEMIER at 3:26 PM