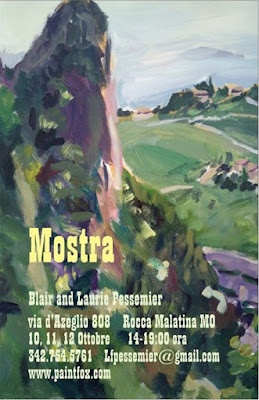 As winter comes on, I can smell fires burning in the neighborhood.    In the early morning and late afternoon, I am put in the mind of Istanbul, where I once smelled those 5 PM fires signaling the start of supper.     On the weekends I smell the delicious fireplaces, burning alder or chestnut, chasing away the chill of the country house of a Bolognese or Modenese neighbor enjoying the fall landscape.   I am about to light my own fireplace, in our kitchen, replete with soup pots and tigelle irons. 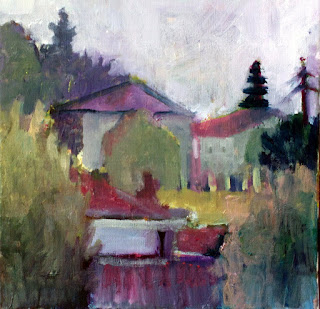 “Look, it’s Hercules”, our backseat passenger exclaimed on a ride down a country road on Tuesday.  The man walking his bicycle at the side of the road seemed fit, a bit beefy, but by no means did I think this man the historic superhero.  “He’s my brother-in-law”.

Hercules has eyebrows you could use to  knit a sweater, but otherwise, he is just an Italian guy with a flat tire on his bicycle.  Our passenger suggested we stop at Hercules’ farm, just down the road, and tell his wife Esther he’s on his way.  You have to get used to these sidetracks if you’re going to live in Italy. People stop and visit all the time, schedules be damned.

Esther walked us out to the back yard, to show us the pond, which they fashioned from the stream running through the property.  The ground was soft beneath our feet – I realize this means nothing to most people, but after 20 years on the Paris sidewalk, actually stepping on the soft breast of mother Earth can almost bring me to tears.   I could smell the dirt, the grape vines, the garden.

Esther pointed out the piles of grape skins, remains of squeezing, spread around the ground to enrich the soil.  She handed me as squash as I was leaving, a  beautiful dusty-turquoise model, which she advised me to bake.   After I paint it. 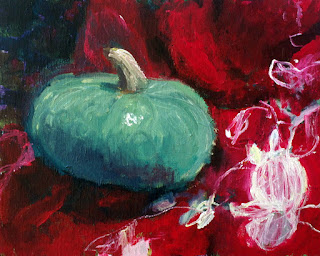 This morning we awoke to the thickest fog I think I’ve ever seen.  I could almost capture it in my hands, and could certainly take big bitefuls.   Paul called to say he was up by the Sassi, we must come and see.  It was as if we were in an airplane:  fluffy white clouds below and pure blue sparking sunshine on the treetops and rocks.  Breathtaking.

I feel lucky to have travelled and seen as much as we have.  It is those ephemeral moments of fires starting and fog, soft earth and hard squash, that give my mind a joyous air.   I think of travel before now, and trips to come.   I made a proposal for 8 to 14 painters to paint with us in Paris next May, and am really looking forward to it.  Here, I distribute flyers to paint in Bologna or Modena, and practice mixing the colors of fall.

Speaking of our former city, our friend in Paris, Richard Nahem, has launched a new, wonderful “postcard” program one can subscribe to.  Each month, he makes three postcards from his images.  To read more about it, go to:  Eye Prefer Paris Postcards.

Richard wrote a wonderful post about doors in our region of Emilia-Romagna...     and to learn aboutBologna click on this great NYTimes article...   Momma Mia, enough links!!!