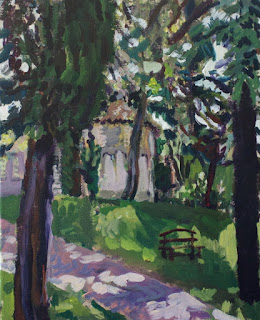 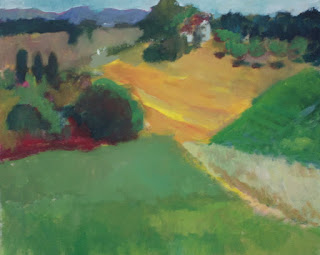 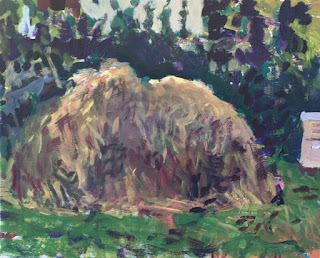 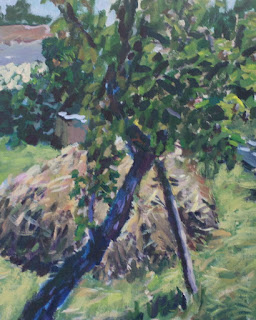 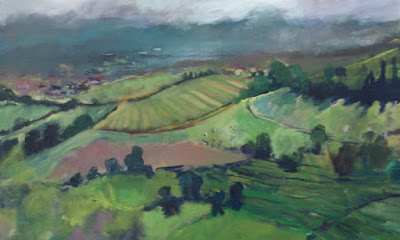 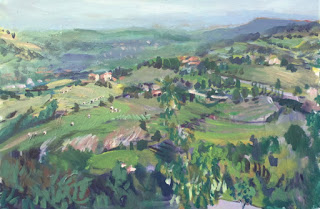 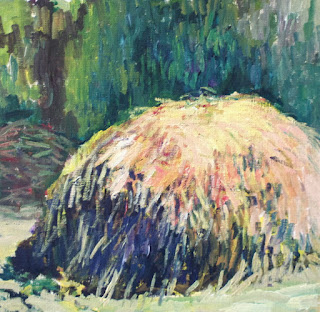 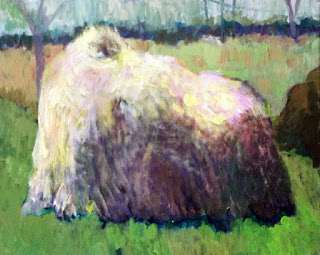 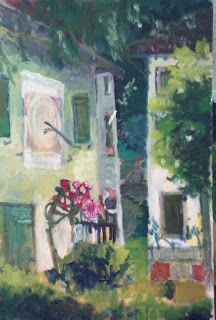 
​Don't learn unnecessary words, my language tutor online urges me.  How many times will you want to know the word for duck or watermelon in everyday conversation.

This week I had to bone up on dental terms.  Really, if there are words you never want to use, they are "il mal di denti" (tooth ache) "gengicive" (gum) or the truly dread  "il trattamento di radice" (root canal).  I kept telling myself it was getting better, but that little voice of my best friend in high school who became a dentist kept repeating "teeth are the one things that never get better on their own".  The power of positive thinking lost out to another sleepless night, and on Thursday I went to the dentist office, open just two days a week, in our little town of Rocca Malatina.

Blair and I have been painting in earnest this warm, sunny week.  In the cities the temperature is 90+F (33C).   It is a full ten degrees cooler here, but we do most of our painting in the very early morning.  Light is best, and it's cool enough if our site gives way to sun.

I went into the dentist office after painting -- the assistant said, come at 4.  When I got there it looked closed, but alas, it was open.  It was a father and son operation, and both spoke English, which emerged as soon as I began describing pain:  it isn't sensitive to hot or cold, but if I touch it, it really hurts.

The dentist could see the hole, as he described it, but he was afraid it went much deeper.  We'll skip the xray he said, it's got to be dealt with in any case.  Just tell me, I asked, what you are going to do.  It was only last year I got over my fear of the dentist, and this was taking much resolve.

I am really surprised how slow I am to speak Italian.  My course says I am 37 percent literate, I have an official vocabulary of 837 words (I know more than 1000, though, because root canal isn't one of the official words), but it's still slow to come.  I read that recent studies have shown it has nothing to do with age, but rather the lack of fear to speak as one gets older.  Not to mention one false move in French and you feel like an idiot -- the Italians are much kinder, they WANT it to work out.

The dentist proceeded as I sat there to numb my jaw, and yes, perform the root canal procedure right then and there!  It was not painful, but I was sent home with antibiotics and pain medicine. The next afternoon I went to the cafe across the street.  I described my tooth ache, and he told me I needed a "pastilla" (soothing candy) -- no, I replied, I need a whiskey.
​
I have to go back next Thursday for the final sealing of the tooth.  Momma mia!

Posted by Laurie and Blair PESSEMIER at 7:39 AM