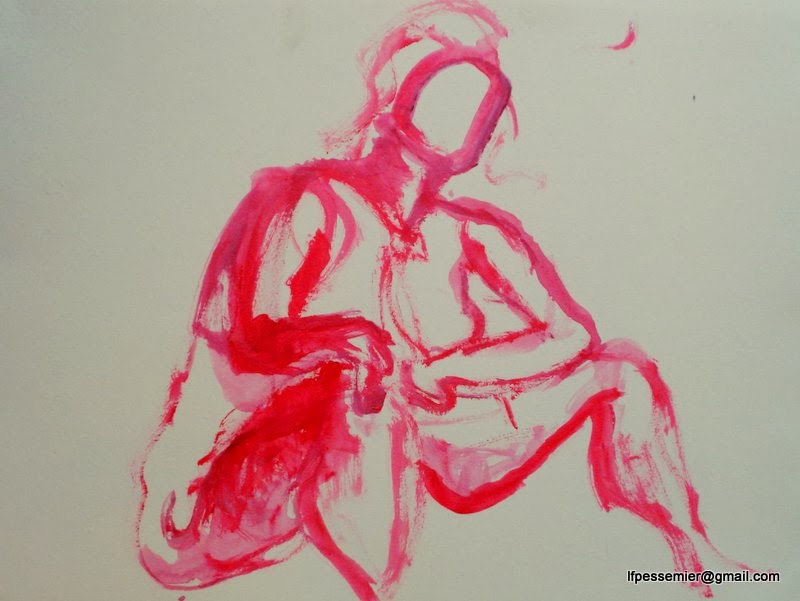 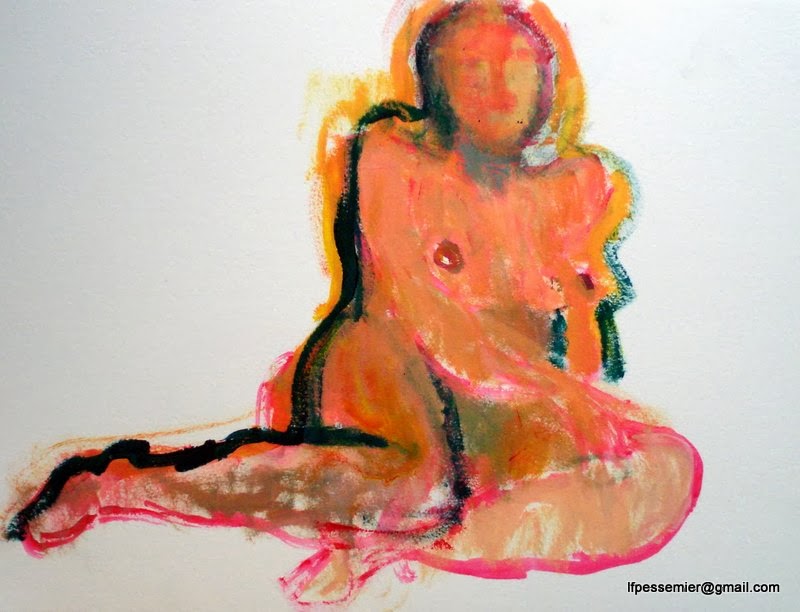 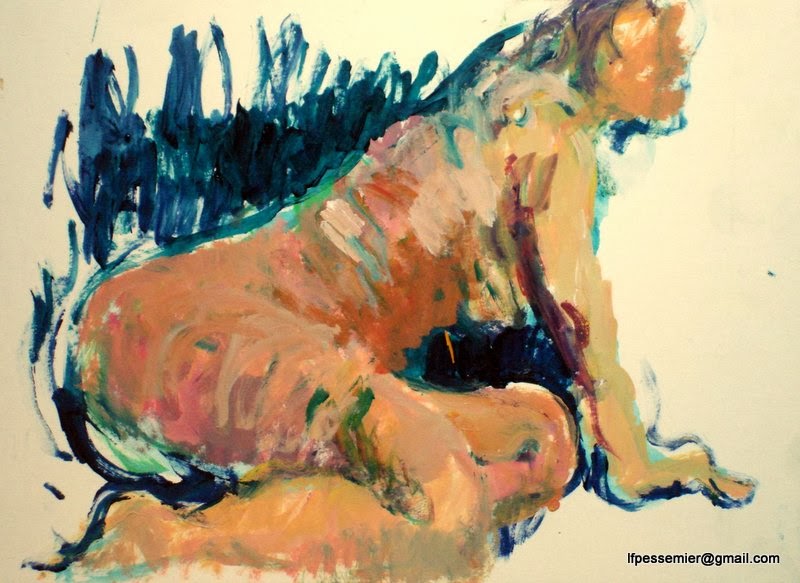 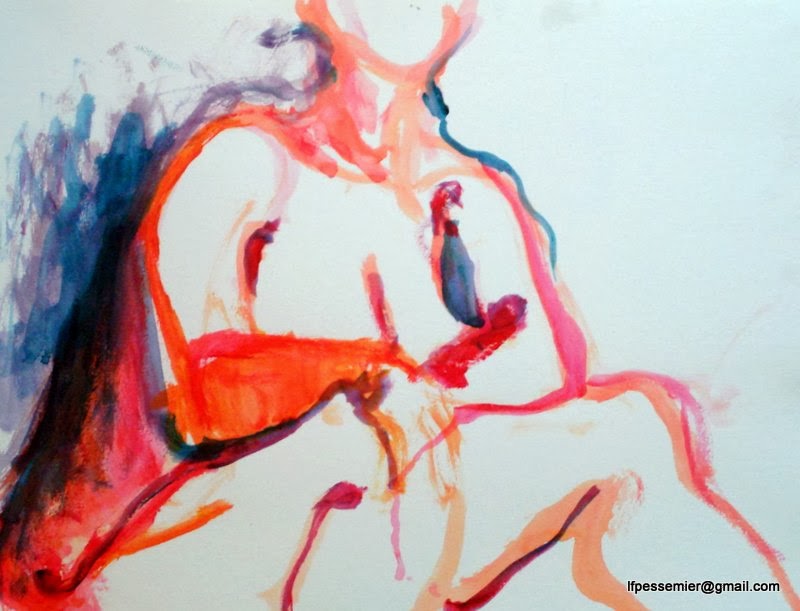 I had my first workshop date this week in Paris.  R and I walked up to the Atelier Grande Chaumiere near Montparnasse at 2:30 and waited for the 3:15 session to start.  A few older French women were waiting, to get a choice spot, or at least your usual spot.  We settled in on the second tier.

Because this is officially a drawing session, there are three tiers of rails to lean a sketchbook on.  We pick three stools (one for layout) and settle in.  We called earlier to see if we could paint, too, and the manager told us, yes, if there was room.  R had a great new watercolor system – a pen of sorts with a water well, and a soft brush at the end.  It seems the Louvre has forbidden water (oil and acrylic paint is prohibited except to those officially approved by the Louvre), but if one uses a pen like this with color, it’s ok.  R takes classes with a lady at the Louvre, too.

I set up my acrylics (I could paint in a phone booth) and we both got underway as soon as the model struck her pose.  She was a cross between Elke Sommer and Barbara Eden.  Honestly – a little thicker in the hips maybe, but that blonde, good-natured look.  I liked her at once.  She tried to include a ruffle around her neck, which I thought was great, but an incensed Frenchman demanded she remove it.  I thought him rather crass, and he wasn’t a good artist either.

I got so incredibly involved with painting here at the Grande Chaumiere, I was quickly transported to another level of consciousness.  I realize that sounds funny, but it was the case.  It rarely happens to me anymore because I am usually assuring in the comfort of everyone in the workshop, but today I was on another plane.  When I was maybe thirty years old, and I used to paint, I used to get scared when that feeling of euphoria happened.  Then another painter, Ray, said to me, “you’re Catholic, aren’t you?  Don’t be ashamed when you get those feelings, go with it.”  I did go with it and I have been happier ever since.

Blair had surgery this week for a hernia (carrying Harika and I up all those hills in Villefranche-sur-Mer, I say), so I’ve become chief cook and bottle-washer.  We rented a car beforehand, so we drove up the Seine looking for painting/boat sites.  Unfortunately, the rain set in and we only got to get out of the car once – a former quarry on the Seine, filled with water and cut off, like a lake.  This boat-atelier project is really big, and I have some doubts it will be realized anytime soon.  It’s still fun to work on, and maybe we’ll follow the path forward, just slower.

On the way home, the on-strike taxi drivers had blocked the main route into Paris through Porte Maillot.  It was the first time I have ever really been afraid in Paris – it looked like a scene out of a movie, with protesters banging on cars, being trapped in a traffic jam.  I had a very difficult time with it.  I swore I’d never take another taxi again, but lo and behold, after Blair’s operation, I had already returned the car (he doesn’t like my driving) and we were forced to use taxi service.  I asked the driver about the strike.  “Imagine”, he said, “if they tried to take away your retirement savings (he added “you can, your’re from America’) – what will I have if they deregulate taxis and I can’t sell my license?”


Posted by Laurie and Blair PESSEMIER at 5:27 PM