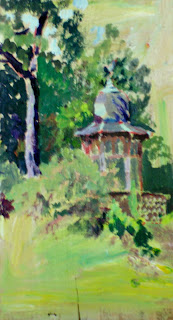 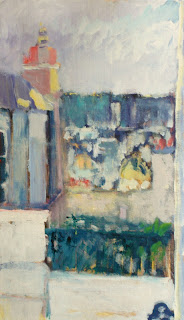 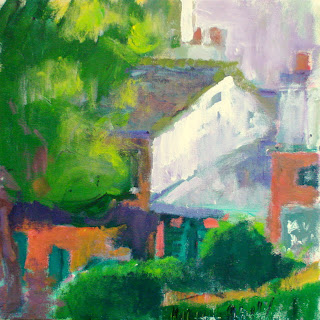 
Magenta.  I would like a poem about Magenta*.  The ‘Poet Publique’, sitting at his typewriter on a lesser square of Montmartre, asked me to tell him more.  “It’s red, but with more blue tones,” I told him. “Still red, but cooler, not as angry.  It is my favorite painting color [along with turquoise].”
His long fingers tapped the keys of his old fashioned, mechanical typewriter,  a brand I didn’t recognize.  Across the way a man played a guitar and a woman sang.  It was a surprisingly unpeopled scene, especially for Montmartre.
I needed an artist’s statement for an art show** here in France.  I have ten pieces on display at a gallery in Feucherolles, outside of Versailles.  Magenta is part of my painting, and I thought the poem might describe my philosophy.  Plus, it would already be in French.  And who could ignore a “public poet”?
We sat beside the poet  as he typed.  He gave us other poems, in French and in English, which he had written.  He wore glasses, a white shirt and a ‘hip’ jacket – a bit of an Oscar Wilde look.   We’d been walking around Montmartre, trying to develop a slow and interesting tour to offer our painters.  I am not sure it is possible.  Montmartre is steeped in history, of art, and other things, but it is brutally “touristique”.  Montmartre is “unimproved” Paris, much as it was several centuries ago -- untouched by the Haussman plan of the late 1800s.
We drove out to the show at Feucherolles on Friday night, with two charming friends, who were instrumental in our inclusion in the event.  Pauline, the proprietrice, arranged the works of 18 artists at her country-farm.  There were a half dozen out buildings of substance, in addition to the house and shop.  One enters the gate and is transported to an expansive “secret garden”.  Pauline’s husband, Harold, is a landscape gardener, who transformed the grounds into a magic place of hidden fountains and rare trees.
My work  was in a little building with a stone terrace, shared with someone who worked in mixed media depicting giraffes and donkeys, and a video artist.  In an adjoining open space was a collage artist and in the barn, a photographer.  There were sculptures and prints, drawings and other paintings – all housed in idyllic follies around the grounds.   Much stone.    At the furthest reaches of the property was an area for children, defined by trimmed boxwood, with lush foliage all around.   One could get lost in the details of flora and artfully tumble-down ruins – a veritable fantasy.
“How do you like la belle France?” someone asked me.  I replied effusively in the affirmative:  this was truly what France is most proud of.   It was like being on George Sand’s, or Collette’s estate outside the city, but this is the present, and it was an honor to be part of it.   To top it all off, I sold two paintings on opening night!
*
Du Bleu en dit qu'il est pur
Et n'a
Comme n'en ont ni le ciel
Ni la terre
De frontière palpable
Et je crois
De même
De la couleur qu'on dit magenta
Qu'elle n'a pas d'autre frontière
Que le rouge qu'on y voit
L'air et le feu
Trouvent là
De quoi se reconcilier
Posted by Laurie and Blair PESSEMIER at 11:56 AM