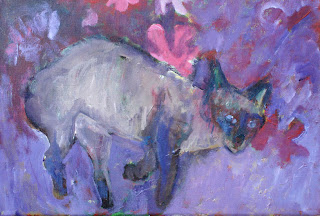 Rather than writing this artnotes, I should be reviewing old artnotes for their publication as an ebook.  I have been hot on the trail of electronic publishing these days:  for our baseball book,  many children’s books (a compilation of 6 Christmas stories),  a sort of art catalog, as well as artnotes’ books.  To read or watch the process on youtube seems like a monkey could do it, but this chimpette is stymied by the art and pictures.  I seem to have gotten one epub book going with “Summerball” our baseball production: now to market it.  Facebook invitations loom.
Blair has been in the USA all week, and Harika has taken to the bed.  She waits for him at home each day:  I have to drag her away from our building for her immediate needs.   She is not “off her food” however, and I have continued to make her various meat/spinach/rice dishes that she might keep up her strength until Blair returns with “call of the wild” venison kibble.  This dog is not spoiled.  In fact, when people insinuate such at the park,  I make a mental note.
I’ve been getting out a bit with Blair not here.  My very close girlfriend, who moved back to Tunisia, came to visit and we drank tea and ate toast on Tuesday.  I tried to convince her champagne was in order, but 10 AM was just too early.
Today I went to an American women’s coffee klatch.  It was kind of wonderful – rather exceptional American women  (or married to exceptional men, and  we know who is behind every great man), all together for visiting and pastry.  How can you go wrong?
It was a charming visit from the start.   My friend forgot the digicode to get into the building, and there was another woman there in the same boat.  We three all tried different telephone numbers:  “we’re downstairs what’s the code?  You mean this isn’t D?”  I laughed at our silliness.  Finally another attendee appeared, in control , and we all dashed up to the apartment.
People were surprised I’d been in Paris so long but never attended a coffee with them.  “I was just too fascinated with the French, “ I said, “but this time I am myself.”  When I read back to review my artnotes from 1999, I see just how fascinated I was.  I hung on every nuance, every little difference.  Many of those nuances and differences don’t carry over to the younger generations.  I don’t think anyone is changing the service and glasses between each dinner course anymore.  And NOBODY is offering cigarettes after the meal.
It was most apparent when my friend H asked if I’d been to the Carrefour (supermarket) yet.  “No,” I confessed, “I am trying to support our little merchants.”  There is nary a butcher  left in my neighborhood  when there used to be two.  Meanwhile, we’ve seen the addition of two “supermarkets” .   I visit Christian of the “Neveux Triperie”  on Tuesdays and Fridays and he cuts meat he knows Blair, Harika and I will like.  In Paris, we all have larger refrigerators than we used to, to accommodate the less frequent shopping.
I visited with a former French teacher, several women whose husbands were posted here, a Khazakstani trying to find a home for a cat, a Hungarian, a hotel student, and several others.  My favorite was a conversation with a former Texan with a penchant for saving the suffering girls in Afghanistan – it had a certain mother-in-Mary-Poppins- movie feeling, with issues outside being more important than issues within the house.   I found the whole thing amusing, from the outside.
As I explained to the head of the group, “…just today I made a “faux pas” with an invitation to tea – I couldn’t go, but in France there is a certain protocol to follow -- but hey, sooner or later the jig would be up anyway.”   I reached for another cookie.
Posted by Laurie and Blair PESSEMIER at 2:54 PM