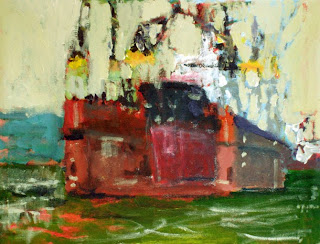 HAMBURG: Dry Dock Laurie Fox PESSEMIER Acrylic on canvas 16 x 12 inches SOLD
.
.
.
The AMERICAN FRIEND
.
When Blair and I were first dating (before the Internet), we shared the same favorite movie: The American Friend. It was filmed by Wim Wenders in Hamburg, Germany. We always planned to go there, and after 30+ years, we finally made it.
Our hotel, on Steindamm, was sandwiched between the Islamic cultural center of Hamburg and the chic Alster lake. Our street was home to a variety of peep shows and gender shops. Between the hotel and the lake was a gay men’s community. We were walking distance to the central train station – I recognized settings from the film. Luckily we had a quiet courtyard room, where Harika lounged in the cozy down comforter most of the day.
Hamburg had always been a culturally diverse city, still evident in its Portuguese, Turkish and Italian restaurants. The Portuguese were Sephardic Jews, fleeing torment on the Iberian peninsula in the 17th century. Hamburg likewise welcomed Protestant refugees from France and Netherlands.
Hamburg was founded in 808 by Charlemagne. The port really came into swing in the twelfth century. Hamburg was designated a free imperial state and was allowed to operate its port “toll free” on the Elbe. It suffered during WWII in a particularly brutal air raid using phosphorus. After the war and before reunification of Germany, Hamburg’s port services were limited. It is again on the upswing.
The Beatles played their first gig in Hamburg. This seemed evident to me in the very good radio stations -- choices were limited on the car radio between the French border and Hamburg. I always think you can tell a good place by its radio sound track.
50 miles from the sea, the port of Hamburg is the second largest in Europe after Rotterdam (Antwerp challenges Hamburg, depending on who is counting). At a fish restaurant, we looked out on a container ship in dry dock; a number of ferries and tugboats; pleasure and tourist craft; cranes as far as the eye could see. The scale was magnificent. The working port has always been one of our favorite venues.
The weather was cool and damp, and the grey sky set off the fabulous brick architecture of Hamburg. Blair and I found great details in doors and hardware: near our hotel was a building with wonderful metal details from 1930. On the lake where we took our morning walk, a small white and red wooden boat ferried passengers. Huge architectural development, hopefully sensitive, is slated for a rapidly growing Hamburg.
We were in Hamburg for the Aircraft Interiors show, which Blair’s company took part in. We spent our daytime hours working the show, and our early morning and evening hours seeing Hamburg. I didn’t get a chance to paint while I was there, but painted my impression by memory and photographs.
.
.
. 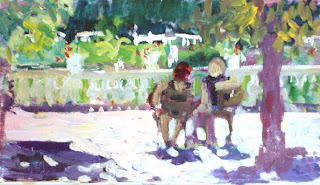 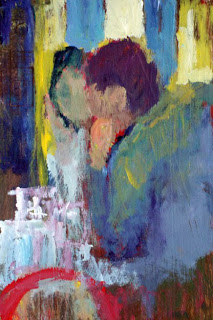 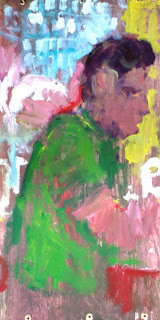 Fleurus: At the Bar LFP Acrylic on wood 7 x 13 inches

Posted by Laurie and Blair PESSEMIER at 11:33 AM