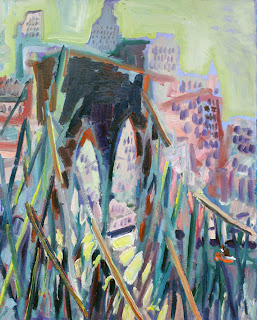 Bridge M. Blair PESSEMIER Oil on canvas 16 x 20 inches
Artnotes: On the Bridge
I can’t think or act in hot weather. The last two humid, sticky weeks have been a blur of anxiety. It was with great pleasure I donned my sweater, albeit cotton, this sixty degree morning.
Maybe it hasn’t just been the weather. Sometimes it’s the place. In anticipation of Istanbul I have been reading Orhan Pamuk’s SNOW. The main character, Ka, a poet, hears a poem, as if a voice in his ear, while he is in a particular town. It hadn’t come to him before, or since. While he was in this town, dozens of poems filled his head.
I first started writing Artnotes at my desk at 72, rue de Lille, in Paris. I had to be in that particular spot and words would channel through me and my fingers onto the computer screen. It was a phenomenon which changed my life. Prior to that moment, I’d written very little: suddenly, hundreds of words a week, often a day, would emerge. It was with needle-point precision I would have to be in the corner of our bedroom with the steel shutters. The desk eventually evolved to a chair and table, but it had to be in that precise location.
There are conditions just right for certain activities. I could paint for hours at a time, at that same address, but only in the first floor studio we traded/sublet with a friend. Ensconced with my butterflies and beetles, I would paint bugs, with the window open to the courtyard. I became insanely protective of the spot, as if it were a door to the secret garden of my muse. The pink room at 28, rue d’Assas, was much the same: French windows on the courtyard. I would be rewarded on a particularly good day with a smile and greeting in the window from our neighbor, Olivier.
Blair, my nephew M, and I visited a “secret garden” of sorts, in Lenox, Massachusetts, last week. It was the home of two artists, Morris-Frelinghuysen. The studio, a replica of Ferdinand Leger’s Bauhaus studio in Paris, where Mr. Morris studied, and the house, a Bauhaus creation, were set on 44 acres of natural, wooded landscape.
It was a curious place. One walked 1/3 of a mile from parking to the house – it was possible to call a golf cart for a ride, but we walked. We went on a short woodland stroll before proceeding up to the buildings. It was a magical place, so much so my nephew and I talked of it being a secret garden.
The house was decorated by cubist murals executed by Suzy Frelinghuysen and George Morris. The house was comprised of clean lines and square windows. A black “dot” as seen in Leger’s artwork, appeared throughout the property. I counted only half of the actual dots present throughout the abode and studio. A leather floor, a quirky bar, and a fireplace in every room were features. The couple never discarded any furniture, but rather retired it to the barn, from which pieces by Gilbert Rhode, Frankel, and Nelson were recently retrieved to bring the property back to viewing condition.
Our tour guide was a dream, in a dress that might have been worn one time at the house. She was delighted to show Blair, M and me around – a group of four docents from the Museum of Contemporary Art in Chicago joined us in the end. My nephew was the hit of the show, an 11 year old aficionado of modern art – he suggested all sorts of inspiration for the works. Not only were there pieces by the couple, but also by Picasso, Calder, Gabo and of course, Leger, just to touch on a few.
Blair is experiencing a renaissance here on the porch of Hemlock Lodge, where we’ve been spending all of our days, if not all of our nights. A casual comment by a passer-by at our artshow inspired him to paint in a freeform style again – something begun in the ever-inspiring Tunisia, but dashed during the last year of bouleversement.
Maybe it isn’t exactly a place, but an alignment of the stars, or conditions, that allow a flow from muse to reality. I long to be that vehicle again, channeling the product of the gods. I can sometimes feel it when things come together for me in the kitchen or in the space between two of these words. I am on the brink of great things.
Laurie Fox PESSEMIER
someone wrote me about a related link, and, if you are interested in the idea of a place/inspiration, take a look at: http://www.ted.com/talks/elizabeth_gilbert_on_genius.html
Posted by Laurie and Blair PESSEMIER at 4:03 PM