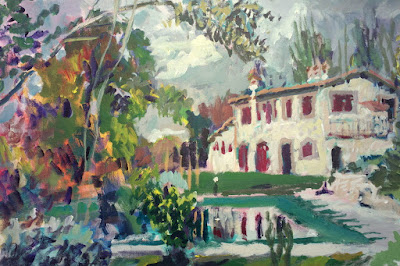 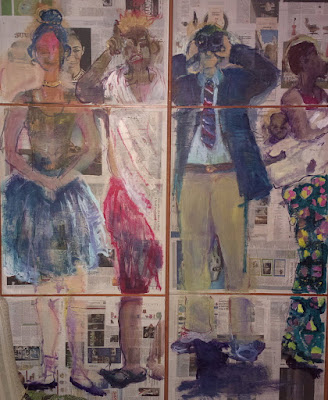 After a hundred false starts for this week’s artnotes, I have decided to tell you about our Saturday adventures.  Originally, we’d planned to go into Rome with our neighbor, but he feared rain.  As former Seattlites, rain doesn’t bother us*, so we decided to drive up to Italy’s oldest flea market, in Arezzo. *Actually, rain makes me pretty crabby, but it’s honestly better if I get out.

Arezzo is little more than an hour and a half from here.  It’s an easy go, North on the highway toward Florence.   Arezzo is famous for its murals, painted by Piero della Francesca, in the cathedrale of St. Francis.  It is a medieval/renaissance towns, with cobblestoned hills, and fabulous architecture.  But we went for the flea market.

The entire center of the town is shut off to traffic and filled with stands selling everything from silver, to lights, to historic fabrics and furniture.   We were in the market for things for the new house, and walked away with two small easy chairs and a light fixture, for a grand total of 110 euros.  We looked at almost everything, and left behind a great desk (110, but might have got it for 90) and a set of six elegant dining chairs, contemporary, for about the same price.   There was a great dining set with chairs suitable as easy chairs, but it was pricier and Blair wasn’t keen on the table (he never goes for light wood).  This was perhaps the best flea market I have ever been to, which says a lot after Paris.  It’s the first Sunday of the month and the previous Saturday, if you are planning your trip.

Blair is an addict of the flea market, as everyone who knows us will testify.  We left Arezzo after only about two hours, and drove home because there was a “vintage”market taking place in Borgo Nuovo, right next door to Stimigliano.   That market started at two, and at 2:30 we were driving around desperately to find it, like someone seeking a heroin fix.

We were thwarted by a large herd of sheep and three shepherding dogs that attacked our car.  Harika was in the back seat, barking and spitting foam against the back window where one persistent dog was trying to get in.  “Don’t hit them, don’t hit them!” I was hollering as Blair maneuvered the car by the dogs – the sheep were long gone.   I am thinking of making a sheep Christmas card, inspiration coming from the craziest places.

We finally found the vintage market, which turned to be an individual’s property that I had formerly mistaken as a dump site.  In fact, it was totally organized and well laid out.  For one of the first times here, we heard English spoken.  Is there something about Anglo-Saxons and flea markets?  Two men from Vancouver, BC who lived nearby were seeking bargains, as were an American couple from a neighboring town.  So we came away with four new friends, five espresso/tea cups, four black and white bullseye dishes, 3 black saucers and a large anchovy tin (sounds like the 12 days of Christmas? hmmm. maybe a better card idea).

Today there is a market in Farfa.  Who knows what we might find?