Artnotes: I never thought of it that way... 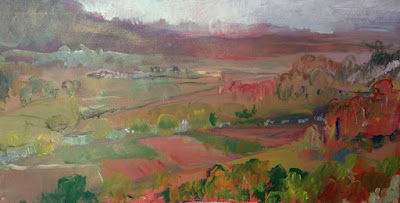 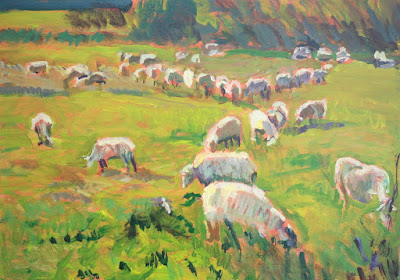 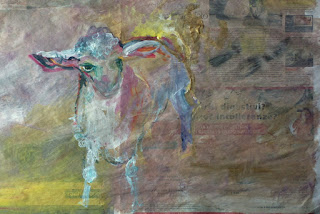 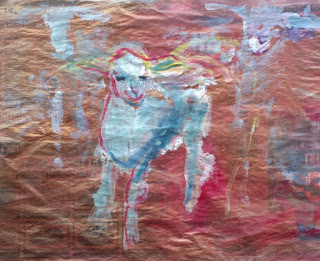 The dog looks like a large golden retriever, but in fact, he is a maremmano.  And he is fiercely guarding his sheep at the side of the road.  One of the most remarkable things about living here, north of Rome, is the presence of sheep and their shepherds.  Sheep are moved from field to field, from Rome to here, just as they were millennia ago.   We see a herder who actually has a bagpipe.

Blair and I try to stop to paint them, but it is nearly impossible.  We take photos and Blair works from those.  We were out riding around with M, who has become our shepherd.  I never really think of myself as a sheep, but Blair says he might be.  Were I a sheep, I would be the one they slaughtered first, for insubordination.

M, a teacher who lives in our borgo, takes us out to show us Roman roads, and particular sites around the area.  We’ve learned about the routes which lead to Rome from around our area:  the Salaria (the salt road), and the Flaminia.  We’ve been to a number of nearby medieval and Roman cities.  We’ve learned Italian words for architectural terms.

Blair and I take ourselves out on near-impossible tasks like finding the dump where we get our official garbage cans.  It is a half day event, visiting four different places before we happen upon the right one, just in the nick of time before the three hour lunch closure.

I am astonished by how different this area is from Rocca Malatina.  It seems much more clearly divided between Catholic and Communist.    People are very clear about which camp they follow.  Maybe we have just not had as much direct experience in this conversation, formerly.  As our Italian improves, it occurs to me it might be better to keep my mouth shut.

We sit with M over dinner.  I miss having a flock of guests, but they will likely come with time.  Meanwhile, I make baccala (dried salted cod) with olive oil, tomatoes and garlic and we talk.

“Is it no wonder the Catholic church was such a success?  With artists like Michelangelo, Leonardo da Vinci, Brunelleschi,  people could just go to church to experience the spirituality of the art!”  M expounds, banging on the dining table.

I guess I never thought of it that way.
Posted by Laurie and Blair PESSEMIER at 10:12 AM