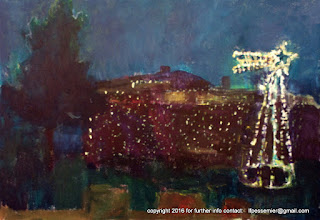 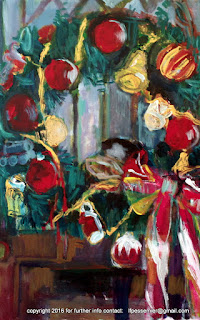 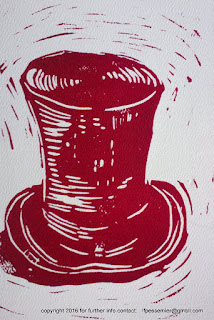 Harika has been waking me up at 5-something every morning.  I take her out, on the leash, in the dark.   She can’t go out alone because there are nocturnal animals which have been killing the chickens and rabbits.  All the rabbits are dead, and at least a half-dozen chickens are gone (commemorated by piles of feathers).  We’re not sure it’s a fox or a wolf, but in any case, our “salon” dog isn’t equipped to deal with either of them.

Harika races off the porch, down the stairs into the side yard.  There has been very heavy frost these last few days, and grass gelato crunches under my shoes.  It’s slippery.  We run up the side yard.  She sniffs and I look up at the many stars.   It’s perfectly clear these cold mornings.

At Ollie, the beagle’s, house they have the most extraordinary Christmas lights.   It looks as if small green stars are surrounding the house.  I think they are projected.   Once dawn breaks, it is impossible to see them anymore.  They also have a tree and comet decoration.  The comet is a popular motif here, I suspect it represents the “star in the east”.

I love the idea of a star in the East. I’d like to go East this winter, but I think we will be going to Sicily for January and February.   We’ve found a good spot, nearly on the water, within our budget.   We had considered Naples, but the Sicily gig looks nicer, is cheaper, and will likely be warmer.
Harika will be close to her home country of Tunisia.   We’ll be in Palermo, and make trips around the island from there.

Our Sicilian friend strongly recommended Catania: “it’s the more oriental part of Sicily”.   It’s always good to have someone in the know.

One of our classmates last week conveyed that very idea.  From Mali, he wanted to know who was the “Capo Villaggio” here – the Headman, the brains of the neighborhood.  In all the villages of Mali, there was one person who knew everyone.  He was the fellow who knew what apartments were available, what families needed help, or where to find a job.    Our teacher tried to explain how those were elected, more “legal” positions in Italy.   It was a complex subject.

After class, we talked about the need for a Capo Villaggio in our area.  “Maybe that’s why you’re here,” I told him, “to introduce that very idea to Italy”.


Posted by Laurie and Blair PESSEMIER at 9:27 AM