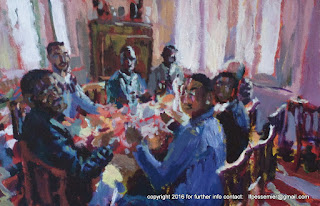 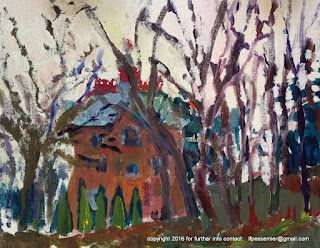 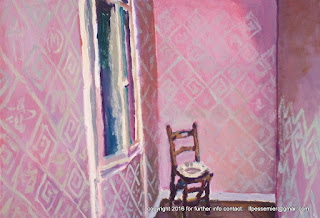 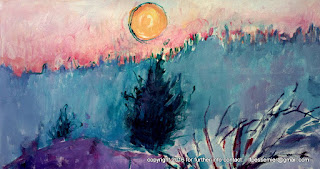 To get you up to date,   I have hosted Thanksgiving for 20 people at my house (15 “Pilgrims” (immigrants) and 5 “Indians” (born in Italy)); been to the USA and back, eating Chinese food three times in six days with my Dad; descended my A380 flight by a series of stairs, along with 600 or so other passengers; fallen ill with cold/flu (despite a flu shot) and recovered.  It’s been ups and downs, and I am embracing the holiday month with vigor.

To me this is a very beautiful time of the year, when the trees are naked and the skies take on a deep blue cast.  I have not painted so much, but look forward to making wreathes and decorating our Christmas tree.   I have kind of a wild idea to paint pictures of wreathes.  I am feeling the circular-ness of life, with my father at age 89 and my niece and nephews just reaching the age of serious dating.   My hairdresser here is having a baby, and I can see both ends of life around me.

It is impossible to look at the world and not see the big shift from my 60 year old generation to an entirely new order.   Between Brexit and Trump, today’s vote here in Italy and the election upcoming in France, it is a sweeping of the old and opening of the new.  Or is is more like the older man at the bar said to me?  “this is all just a temporary correction”.   Maybe it's a pause before real change.  I don’t necessarily LIKE all that is going on, but I want to be part of it.   I am seeking 30 year-olds to keep me afresh.   Come and spend a week with us and help us get our heads on straight.  I’ll cook.

The referendum here in Italy is most complicated:  it is a proposal to diminish the number of senators (an originally Latin/Italian word) from 315 (which it had in Roman times) to 100.   Sound good so far?  Well, the rub is that the senators, at least 95 of them, would be appointed by the “government”, and the president gets to choose the other five.  They are not elected, so were there to be a less-than-savory regime, things could get really bad.  And, for the kicker, Prime Minister Renzi has promised to resign if the vote does not pass.  So you have:  a streamlining of government (good); a limitation of the voice of the people (bad); and a new or not new president.  Pundits say if it doesn’t pass Italy could leave the EU.

We both got two year residency cards here in Italy.  Hip hip hooray!!!   Despite owning a business and living in France for 20 years, we never had more than the right to stay for a single year, and at times that was dicey.   I feel so very welcome (the woman at the Questura really helped make things work out), and we’re thinking we could stay here permanently.    I am writing a daily journal in Italian now.

Posted by Laurie and Blair PESSEMIER at 11:54 AM