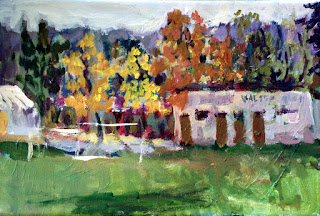 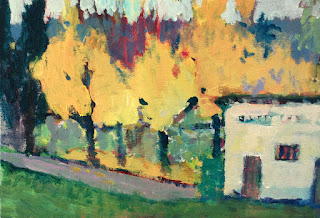 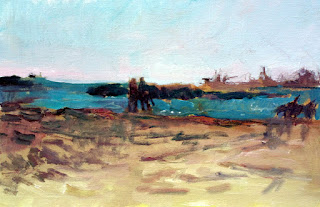 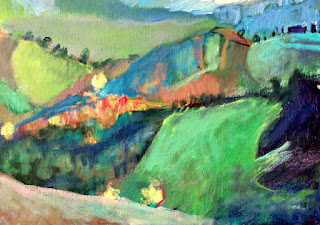 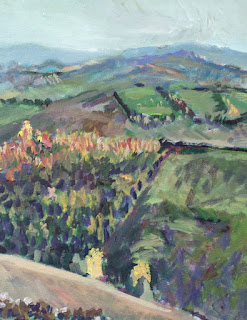 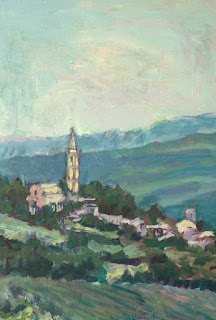 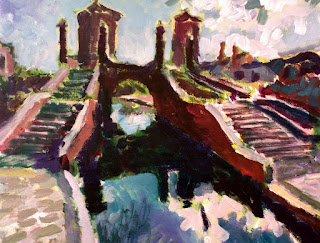 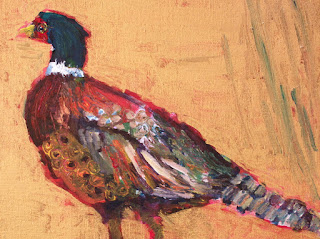 “Eat lunch in Comacchio.” our friend called to say.  We were on our way to the beach, Porto Garabaldi, the “dog” beach, and probably our closest bit of sea from the house.  We are smack in the middle of Italy, with the Mediterranean (actually on both sides) on one side and the Adriatic on the other.   The Adriatic is marginally closer by car (just about 2 hours), so we pointed the Cream Puff east.

Earlier in the week, there were lots of kids wandering around up the hill from our house.  They came in buses, from the city.  One of our party spoke to the the leader.  “Orientation”, she said.   The students were let out, with compasses, to go find certain landmarks in the woods.  I can hardly imagine that activity taking place in my own youth, but I thought it was a useful and remarkable exercise for young people.

We arrived at Comacchio right at lunch time.  We parked outside the town under a shady tree for Harika (she will not leave the car now that we have it back), and Blair and I trekked in, to this “little Venice”.    The town is mainly pedestrian, with intersecting canals.  It is not known as much for the town itself, but for excellent regional food.  My friend added “eel is the specialty”.

We staked out what looked like a good restaurant – two Italian men were tucking into some very tasty looking spaghetti.  There were many restaurants, but I like to choose one where people are eating.  There was a fried eel starter available, eel spaghetti and a variety of other dishes.   We opted for the “spaghetti granchi”, crab spaghetti, cooked only if two ordered it.  Several half-crabs lie on a bed of red spaghetti.  It was outrageously delicious, and really would have been a meal in itself, had we not opted for a second dish of “brodetto di Anguilla”, eel stew.  It was fabulous as well.  I had to pace myself to eat all this food (it came with polenta).   They had a variety of homemade desserts, but I wondered if I could walk back to the car as it were.

We had bought Harika a few slices of bresaola (dried salted beef), another Comacchio specialty, which she downed with bountiful water.   We drove the five minutes to the beach, where we all dipped our toes in the very cold Adriatic.  In the summer, the Adriatic is a murky brown and tepid; in the winter, it takes on a turquoise hue and is surprisingly cold.    I was the only person in a swimsuit, and only proceeded to my stomach; I couldn’t make it any further.   I kept my sweater on.

My own “orientation” process in Italy has been an interesting one.  I am making new friends, always scary for me, and I am shocked at my own eagerness to form relationships.  I am very happy about it.  A friend describes it as the difference between the city and the country:  in the city, you have to have a tough exterior to ward off egotists and charlatans; in the country people don’t have to be like that.

I painted one picture while we were at the beach – the Adriatic region has such a jewel-like look in the sky and water.  Just at that time Harika got in a fight with a German shepherd – our girl’s usual technique of acting wounded and crying didn’t work with this young dog, whose owner had less success in corralling her than we did in catching Harika.  Fortunately, no blood was shed.

We drove home by Castello di Serravalle, overlooking the hills of gold and red leaves.  Next day we set out to paint them.

Posted by Laurie and Blair PESSEMIER at 10:56 AM