Happy Fete Nationale!  Happy Bastille Day!  Nobody here actually says those things – most of the Parisiens in our neighborhood are off on vacation, anyway.  We’re having a little indoor picnic (card playing afterward) with R and V.  Indoors, you ask?
We had seventeen students yesterday, painting outside in the Luxembourg Gardens.  Seventeen?  We  do it because we like them -- they are the most civilized crowd I ever have.  They come from the Choate Rosemary Hall Summer Program, from Connecticut.   Nonetheless, I am dog-tired afterward (we ate lunch outside in the garden on top of it) from being outdoors so much.

It wasn’t only this painting class – I had guests early in the week, whom I LOVE, but I walked even further than usual on Monday and Tuesday.    While sauntering with them along the Seine I had  the first tip off of the Bastille day parade – the jets, spewing red white and blue smoke, were  practicing overhead.    Then the World War II planes, the helicopters – you get the picture.  I love the parade and hate to miss it, but people stand six deep along the Champs-Elysees and oh, my aching feet.

Friday night prior to the seventeen students, we painted after hours at Giverny.   The sun is at just the perfect angle when we make art between six and eight.  I had slipped a pan of Osso Buco into the oven before we left at two, and it was melt-in-your-mouth delicious at 10 PM.  I laid potatoes on top.
Saturday  was the BEST day to be painting in the gardens – on 13 July the French Foreign Legion gets together and awards medals  there.  The “Legion Etrangere” is an amalgamation of folks – many who still don’t really speak French.  They are guys who are escaping their own, often oppressive countries.  After seven years  of hard work for la France, they will be full fledged French citizens.   Blair and I thought of it once, got the hat, but just couldn’t picture ourselves in the Sahara. 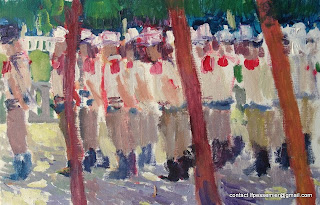 Our first tip off the Foreign Legion was imminent, was when several extraordinarily fit men, in uniforms, with bright red epaulets (French word!) and crisp white Kepis, stood, guns in hand, watching our young painters.   All were in awe of each another.   Soon, a contingent of uniformed musicians marched down the main alley, turning toward place Auguste Compte, playing the Marseillaise.   Once assembled, the awarding of medals transpired.   My painters painted.

At the end of the show, the entire group, including the axe-bearers, in leather aprons (think Lizzie Borden) marched by us.   It really put me in the mood for a picnic.

Posted by Laurie and Blair PESSEMIER at 12:04 PM