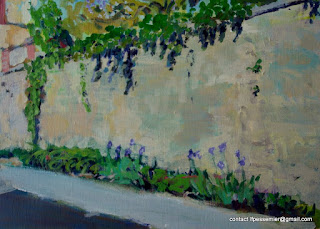 My early morning writing has fallen by the wayside as we have more and more painting workshops.  This week we went out to the Bois de Boulogne and Auvers-sur-Oise.   Coming up is a day at the Seine and Tuileries, just before the opening of our “he loves me, he loves me not” Flower Art Show on Thursday. 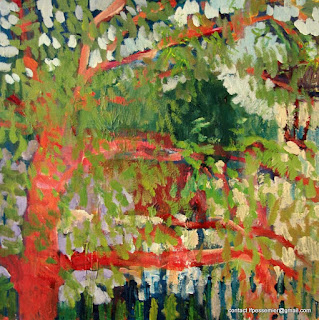 We picked up our painter at 9:30 this Sunday morning – traffic was negligible as we headed Northwest out of the city.   We visited the graves of Vincent and Theo van Gogh – Harika snuck in behind us, despite my best intentions to keep her outside the cemetery.  “We in France welcome dogs,” an older woman told me as I tried to catch her, so off she went.  Something about all those bones made me nervous, but it was fine.

We walked through the field where Vincent was shot – it is pretty clear now that he was accidentally murdered by young boys playing with a gun.  I really feel happier about him knowing that.  A path leads from the fields down to the church.  We continued through the town – Blair had hoped to paint in the city park, but there was an event going on.  We continued further on, where our associate visited Vincent’s rooms.

We painted not far from there –on a street overlooking buildings and flowering trees. Harika schmoozed with every tourist that walked by, as well as the locals.   “This dog wants water,” a local woman in a house dress and penciled on eyebrows admonished me.  She could have been Vincent’s model.  “There’s water in the park, where they are serving lunch,” she continued, “it’s the best water in all of Europe.”  I told her I’d be sure to try it. 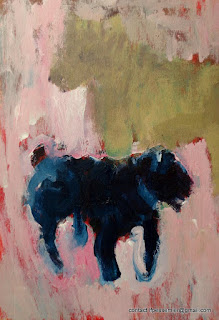 As we finished up our morning painting, we decided to go for the lunch “event”  on the grass.  Salad, bread, duck and roasted potatoes,   crepes for dessert,  wine and coffee.   Eaten beneath a tent, people sang-along to live tunes played on the accordion.

We had lunch of a different sort at our Bois-de-Boulogne session.  We took the ferry across the lake to the Chateau-des-Iles, where we ate a gourmet lunch on the patio.  Men wore jackets and the napery was linen.  I did my best to clean my painted hands. 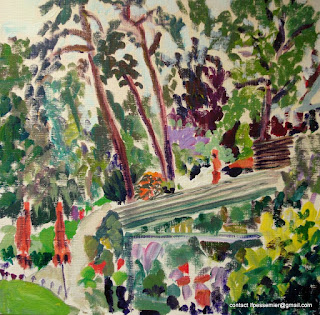 There were a plethora of dogs, people and bicyclists at the Bois de Boulogne.  Most played well together, save for an English bulldog who took exception to a fluffy dog (all ended up intact).  We had lots of admirers and our fellow painter was a good sport.
Mid-week, we ate dinner at our house with an old friend from the Cordon Bleu Cooking School here.  I made a Barbue (which I believe is the equivalent of a Sunfish) – more than four pounds of fish, like a giant sole.  I was honored she took a photo of him. 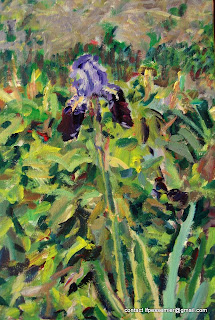 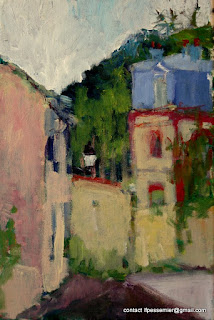 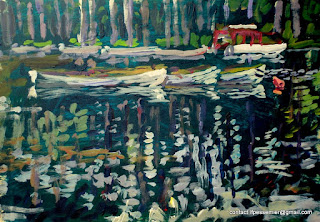 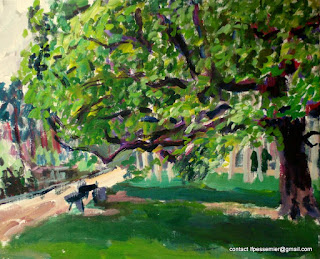 The Big Tree   Blair Pessemier   Acrylic on linen
Posted by Laurie and Blair PESSEMIER at 8:08 PM