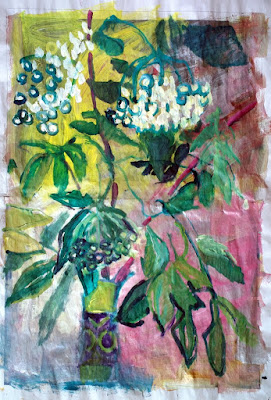 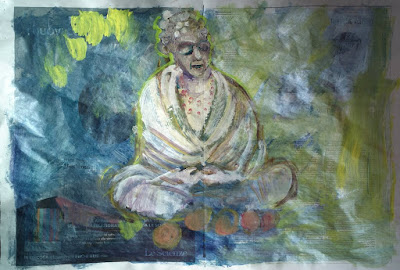 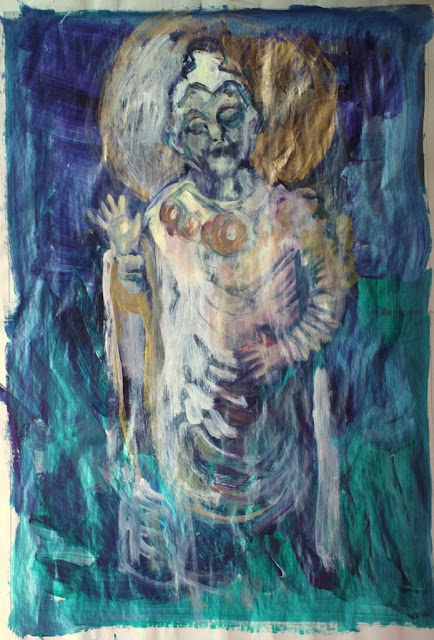 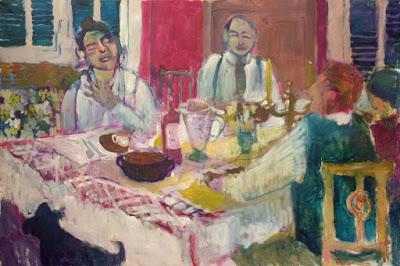 We spent six of the last eight days in Rome:  first, to celebrate Easter with friends from North Carolina; then, for the Show of the 100 Painters, on via Margutta…

We had Easter Sunday Brunch and walked around the Campo di Fiore – Rome is such a feast for the eyes, as well as the stomach.   I am amazed to be walking on ancient cobblestones, and looking at the same Tiber River that Caesar saw.  History abounds, although with broken subways and uncollected garbage, Augustus is rolling in his tomb.

We set up our art show on Tuesday night.  Our stall was a little smaller than the last time, but the good weather throughout allowed us to put our chairs outside the stand.  And there we sat, reading and waiting for customers.

My first book was by Iain Banks:  On Crow Road.  It was a good read, a story loosely based on the religious preferences of a family (the father dies climbing the church, hit by lightning).  It somehow seemed appropriate in this every-so-religious city.  I say that, keeping in mind the Pagan Roman roots and it’s current overwhelming Catholicism:  a Mary on every corner, rivaled only by depictions of Romulus and Remus with the she-wolf; not to mention the 12 gods of Rome.

Simultaneously, I was reading Letters to Poseidon, by Cees Nooteboom.  That’s Neptune (brother of Jupiter, god of Rome) in the Roman scheme of things, and Nooteboom writes him short letters about what goes on in life.  I write letters to my late father, although he was nothing like Poseidon, more like Cupid (in the best sense, a romantic character) maybe, just to express thoughts or experiences that pass by, that nobody else would listen to.  You don’t hear it all in Artnotes, although it might seem so.

The art show progressed at a rather lackluster pace, with minimal sales, and maximum stress.   I did enjoy the parade of passers-by and what they wore.  Some people can look so good, from sparkly socks to cotton sateen skirts in geometric prints.

We rented a little apartment to stay in, on the (currently nonoperational!) subway line, so we could avoid parking charges and the daily 50 minute drive from Stimigliano.  In fact, the place was straight out of the Addams Family, a very dark brown three story house, with boarded up windows, weeds, and a great dane perpetually wandering the grounds.  Our apartment was a former garage, smelling of mildew and  flying ants in the bathroom.  Harika refused to stay there, and she wouldn’t eat at all.  We left after two days, having paid for four, but you know how these things go.  All I can say is “never again abb”.

It did have Internet, as advertised (everything was as listed), and I read a Kindle book by Jon Amdall, Pencils and Process , about taking up drawing again after a lapse.  I recommend to those rekindling their drawing or painting skills.   I read about how bonobos have communal meals, and the importance of “breaking bread” together, for all sorts of animals.  I have been enjoying Nick Cave’s Red Hand Files, who says, “…For me, the search itself is where the action is.”

On 1 May, we had a stellar May Day barbecue with Gianfranco (Garibaldi Caffé) and his friends and family.  Gioia cooked the pasta outdoors, and we ate ribs and lamb and sausage, fresh beans and homemade cheeses:  breaking bread all together.

The real joy of the via Margutta show was not “selling” (or not), but connecting with the various characters along the way.  At the end of five days, I felt like part of the Italian painters club.    Our next show “Ave Maria” starts at Vescovio on Sunday. 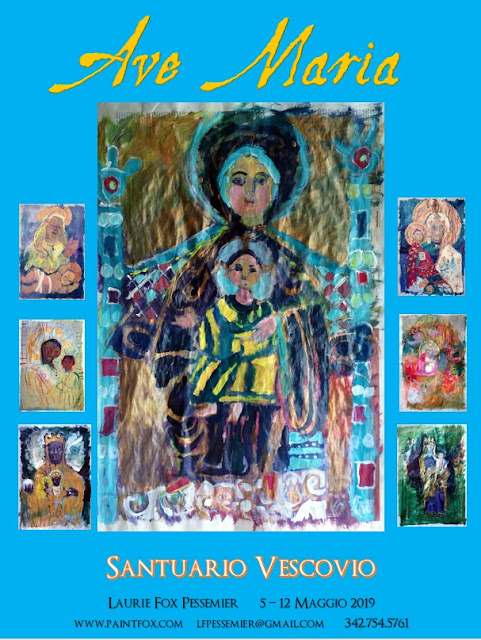 Posted by Laurie and Blair PESSEMIER at 5:37 PM