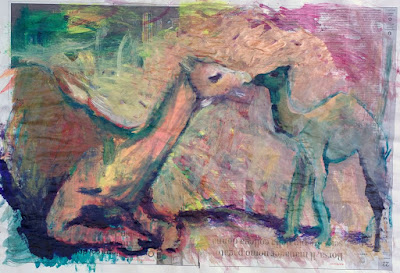 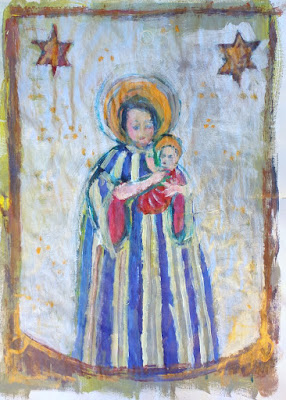 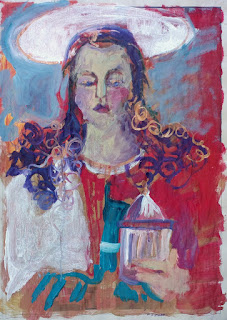 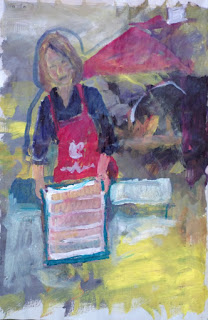 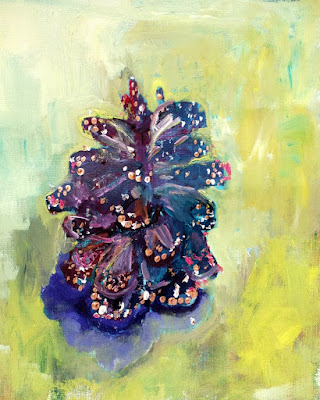 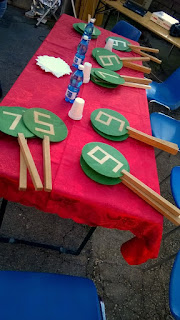 When we got back to Stimigliano the day after Christmas, there was a sparkly pine cone sitting on the kitchen table.  It wasn’t a complete surprise because I’d left a small, unopened pine cone, with a smattering of glitter, on the table when I left.  While I was away for 10 days, it had burst open to become a much larger, brilliant sparkly decoration.

Christmas in Italy is a different animal: there are no holds barred when it comes to having fun.  Today our town had the Sagra dei Dolci di Stimigliano – a cookie festival, in the piazza.  Blair and I were chosen to be judges for the main competition.  The cookie to bake was the pangiallo:  an ancient Roman sweet, made round like the sun (in a bowl), with a golden cast.  This was to commemorate the sun coming around again in the Winter Solstice.  Think a little bit of a cross between a “chunkie” (for those who remember that candy) and a mince pie.  Some were more chocolaty, others more nutty;  my personal favorite had less chocolate and more batter – it came in third. I was astounded by the other judges:  a 10 for one with Frangipangi?  I think the one I liked best would have one but it was first, and I was discouraged from using my 10 point paddle right away (Blair).  Did I mention there were 17 entries?  17 chocolate/candied fruit/nut cookies – if I see a nut this week I will burst!!!

There was bubble water to help it all down, or homemade wine if one were so inclined.
We had a small show of our paintings there, as well, and Blair bought me a hat, to support a local knitter.   One of the more enthusiastic cookie bakers suggested we give a Blair’s painting of the band, to the band, so we did.  They are playing again tonight at 7, in the church.

The Cream Puff crested 200,000 kilometers this week, as we drove from here to there:  Nonatola, looking for Madonas, and Guiglia for the living Nativity.    We saw the ancient Roman ruins of  Ostia Antica on my birthday, which made me feel young.

On Wednesday, we drove to Farfa Tevere nature preserve and saw thousands of birds murmuring.  You have likely seen them: starlings who fly in a seemingly arbitrary formation, but creating clouds of darkness.  It makes me think of a toy I once had with a magnet and steel shavings that I could arrange on a field (a man’s face, in fact).  I could hear the beat of their wings as they created patterns in the sky.  There’s a dangerously slippery wooden walkway which winds through the swamp.  Families of wild boar and badgers roam there at night.  Here’s a dusk to dawn video clip:    https://www.facebook.com/1506435303008402/videos/201498600734967/?t=1 .

The preserve is right on the Tevere, and Blair and I think of paddling and painting there sometime were we ever get our Monet painting boat underway.  Somehow I think one day I’ll come home and find it finished, and ready to launch.
Happy New Year!

Posted by Laurie and Blair PESSEMIER at 10:08 AM