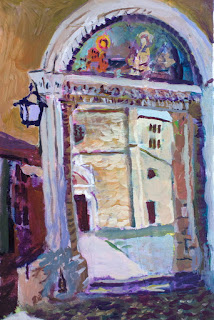 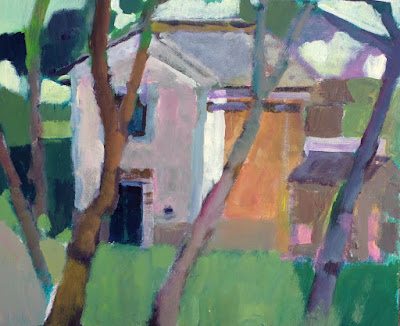 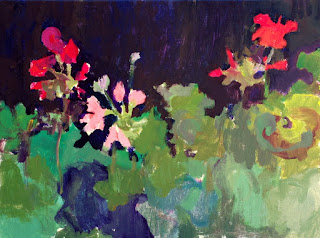 When we first bought our house, we were told the apartment upstairs was unoccupied.  We later found out that in fact, in the 70 square meters (700 sf) above us, a family raised 7 children in the 1950s and 60s.  Now that the parents are passed, nobody knows what to do with the place.  For the last six months, someone has come by about every month to brush off the balcony and check on things.
In any case, Harika has been barking wildly at a new presence on high.   I saw someone leaving with a suitcase, but in fact they were back later, same suitcase.  I tried to tell myself, maybe they’ll be wonderful, like Olivier with the piano on rue d’Assas in Paris.  But today, while I was painting a picture of my recently purchased geraniums, a man in a decidedly black suit passed by.  Harika barked her “don’t bother my mother” bark, and he went into our building.  At first, I thought he was a dandy.  Then, an undertaker.  No, I thought, with that van dyke beard he could be a devil-worshiper.  I made a mental note never to let Harika out alone – he might see her as a sacrifice.  I tried not to panic.  “He could possibly be a Jehovah’s witness, or a Mormon,” Blair pointed out, citing the black suit.
It’s really turned to summer here in Stimigliano.  The heat is OFF and I actually had a mosquito buzz my ear two nights ago.  I must get screens.  We don’t really plan on being here much in the summer, with the Apennine house and a trip to the USA in the offing.  We have managed a few local paintings this week, and I felt oh so happy in the sunshine.
​A notice had been posted there would be no parking or driving in our little town last Sunday. It went on about some event in the Piazza Orsini.  Not wanting to miss out, we joined the congregation in front of the castello.  The castello is a lovely late medieval building I had hoped at one time to incorporate in a renovation workshop.  On Sunday, there were chairs, and lots of folks we’d never seen before.
There were several saxophones set out on the steps, and a group of young players filed out to deliver their recital.  When I see the saxophone, I think of my nephew, Marshall, who plays.  He has his own sax, and I heard play him with a contemporary group at Connecticut College in December.  I’ve reached an age and realization when I can feel like I am watching my own family when I see people of similar age and talent to them.  My own “family” takes on the family of man, as if I am deeply woven in the fabric, and this or that thread is pulled closer to me.
The music concluded, we all applauded, at which time the students retired and the instructor, and four other musicians appeared.  The star:  Emiliano Rodriguez, the “dandy” who was living (in fact just staying overnight) upstairs.  I had a hard time disguising my laughter, and Harika can walk free again.

Posted by Laurie and Blair PESSEMIER at 5:09 PM