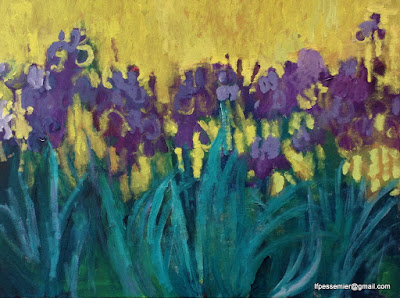 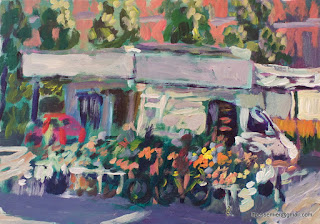 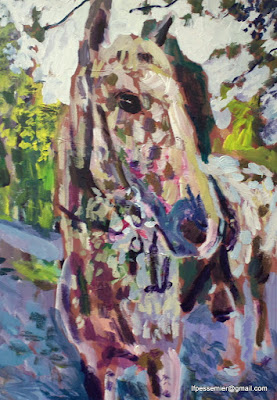 On Sunday, the telephone rang.  “Can you come outside?” the voice asked.   And there, in front of the house was a marvelous Appaloosa, with a friend, G, in the saddle.  To me, the Appaloosa is the best sort of horse, with spots.  Although I am not a rider, I love to see the horses.

We have a project to create a horse head in terra cotta, or similar material, to hang in Rainbow’s yard.   We had hoped to do it over the winter, but the basement was simply too cold to work in.  So June looks like the month of the horse head sculpture.  We’ll keep you posted.

Today, Saturday, the weather just became warm:  seasonal, really.  Before now, it was still cold outside, which made it difficult to paint or do anything one would normally do, outside, in May.  Despite the call of the cuckoo, the herald of spring, the season only really sprung this weekend.  The cuckoo calls in Rocca Malatina from dawn until dusk.  I always expect to hear the creak of the clock’s door and the slam as the bird recedes into his house.  I never heard the cuckoo, outside of the cuckoo clock at my parents house, until I moved to Italy.

Meanwhile, the prairie around our house has grown to be as high as an elephant’s eye, or a horse’s eye, in the case of Rainbow.   The big mower has gone to other yards, who couldn’t stand the “great plains” look any longer.  Where there is the least amount of slope, the mower slips down the hill, exposing great swaths of mud.  It’s better to have waited, although my allergies are in full bloom.

We painted pictures in the Rocca Malatina market today.  Our town only has two vendors, both selling vegetables; one with plants, too.   I had been living under the impression our town had 3000 people.  In fact, we    officially have only 558.   Which means we are lucky to have a market at all.   One of the vendors is from our area; the other is a family of Neapolitans (who must live nearby).  I try to buy something from both, so the market will continue.  Strawberries are in season.  I made a strawberry risotto for lunch.

My Italian teacher brought over a half-dozen “Anglophones” to see our house on Saturday.  We toured from bottom to top, with one man visiting the basement.   We took photos and had laughs, and will join them on a tour in Bologna on 31 May.  Ahhh, spring.

Posted by Laurie and Blair PESSEMIER at 9:10 AM