Artnotes: More than Just a Ride 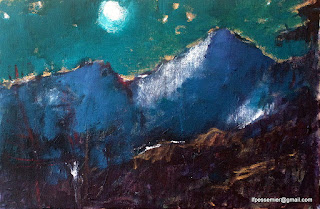 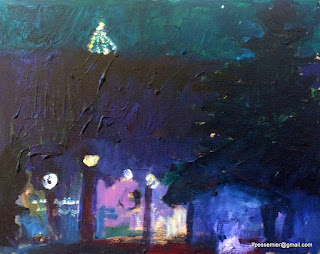 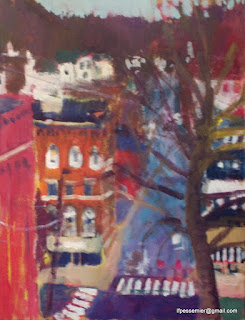 Artnotes:  More than a Ride

I boarded the CT Limo at JFK airport on Tuesday last, with an Israeli soldier, a Presbyterian, a woman from North Carolina who collects Catholic art, a Jewish girl living in New Orleans.  The driver was a Muslim man from Sudan.  There is no punch line to this joke, other than to say, where but in America can this fun and peaceful encounter occur?  Luckily it was fun, because with the terrible traffic it took me longer to get from the airport to my sister’s house than it did to cross the Atlantic.

I never quite get on the time zone during these short trips so I sit outside at 3:45 AM painting the Christmas lights on the soldiers monument, seen from my Dad’s elderly housing complex.  For the young people driving erratically by (that was me, once) I must seem like an hallucination.

I visit my sisters and niece and nephews.  My sister and I went to Winsted native Ralph Nader's new "American Museum of Tort Law".   It is quite an interesting place -- I never realized how important an individual's right to fight a personal injustice was.  Ralph's first big success came with "Unsafe at any Speed", exposing the dangers of the Corvair.  Later, the case against Ford and the Pinto exposed how Ford thought it better to pay off families and injured than to fix the car that was bursting into flames.  The asbestos case against Johns Manville was the largest ever brought.  I walked away thinking of lawyers as heroes instead of as ambulance-chasers.

Artnotes would have gone out on Sunday at this point, with a snappy byline. My tablet, however, let me down.

So you get to hear more about the Connecticut Limo service: late yesterday morning I sat in a full van with another muslim driver -- I wouldn’t mention it, but he had some Koran quote hanging from the mirror.  As we made the transition to New York state, the man next to me said, “Oh, look at this 34 minute delay coming up!  Should I tell him?”  I said sure, he seems like a reasonable fellow.  So the guy on my left and the woman on my right guided the driver, rather dumbfounded, but eager to make his timetable, through the streets of suburban Manhattan.  “You really need this app,” the woman told him.  “Can you put it on for me?” he asked.  The three of us plowed through his Arabic keyboard, turned on his GPS locator, and got him set up.  “What a team we make!” the four of us exclaimed as we made our way into terminal 1.

Posted by Laurie and Blair PESSEMIER at 4:35 PM