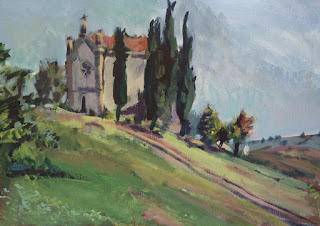 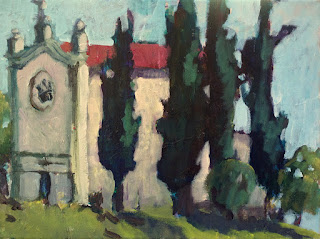 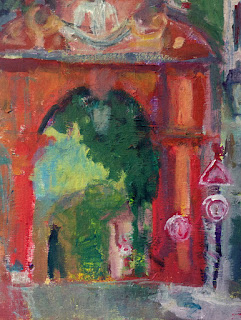 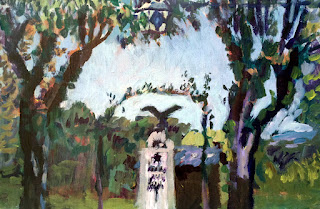 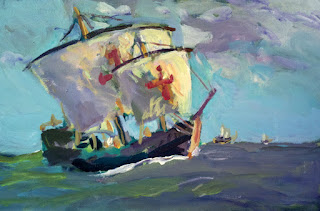 “You cut the crescenti in two”, she explained, “and spread this pasta (a spread, made of pork fat, and garlic) in the center, then sprinkle it with parmesan cheese.”  We were invited to an outdoor lunch at a friend’s house in the hills of Rocca Malatina.  We sat at a long table, with a dozen other guests, eating fried gnocchi, prosciutto, figs and crescenti.   We were at the English-speaking end of the table, with an Australian fellow.  His partner was an Italian woman who had moved to Australia many years ago.  The Italian woman next to me lived in Australia for twenty years, and then moved back to the Guiglia area.  We had a wonderful time.

We entertained Italians later in the week, and on Sunday we will have three continents around the table.

I wrote an article this week for Debi Lily’s magazine, A Perfect Event.  I wrote about Columbus Day, a strictly American holiday, centered around an Italian.  Although I don’t mention it in the article, I think the world is at a similar point to the one it was at in the colonial centuries.

The borders of Italy are being inundated at this time with emigrants from Syria, Afghanistan and North Africa.  Horrific scenes flood the airwaves.  To learn Italian, I should watch the news, but it puts me in a bad humor.  Immigration is always a difficult subject for me, the product of emigrants from Northern and Eastern Europe to the United States.  Not to mention, Blair, Harika and I have immigrated to France and now Italy.

Spaniards were leaving Spain at the time of Columbus, seeking asylum in Turkey, Northern Italy and the Americas.   Muslims (the ones not killed by Ferdinand and Isabella) and Jews went to Constantinople; some of the wonderful dishes of Ligurian cuisine come from the Jewish migration to Northern Italy.   Peru, South America, received a huge influx of immigrants at that time.   Later, in the 17th and 18th centuries, North America and Australia were migrant destinations.

We are among the rare people who immigrate for cultural reasons – we are yearning to learn new language, witness other people and places, broaden our horizons.  Most people emigrate because of unbearable circumstances where they come from.

We have spent this week struggling to regulate our car situation – we can’t buy a car unless we have a “residency” permit.  Despite the fact we have a paper indicating our visa is for “elective residency”, the local powers have been dragging their feet at recognizing us.  Catch-22s abound, but I tell myself at least HERE WE ARE!
Posted by Laurie and Blair PESSEMIER at 3:15 PM