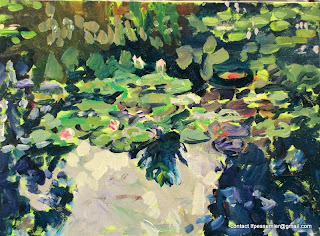 On Friday, we took a day for ourselves and drove, with an American friend, to Rouen.   Our goal was an art show at the Museum of Fine Arts there:  Eblouissants Reflets – Dazzling Reflections.   It was a very large show (100 pieces!) of Impressionist artwork depicting reflections on water.   It was a BLOCKBUSTER!

I love that in France, the humblest, most improbable place would have a show of such magnitude.   Rouen isn’t exactly Paris, but rather a working town situated around an active port, dealing mainly in cereals and fuel.   Rouen is where the locks are for the big boats on the Seine.  I’ve always liked its certain grittiness.  Rouen is home to a very good metalwork museum and a ceramics museum, in addition to the fine arts institution. 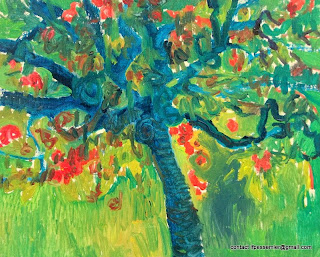 This isn’t the first time we’ve happened upon a super show off the beaten track.   We’ve seen stellar presentations in Roubaix and Lille, as well.

The work bore such famous signatures as Monet and Renoir, Cezanne and Sisley.   There were many works I had never seen before, and I was shocked by how wonderful they were.   There were many depictions of Amsterdam by Monet that were completely new to me – a pale green house on a canal; windmills at the Zaan.   There were even more pictures of Argenteuil,  a suburb of Paris, we pass every time we go to Auver-sur-Oise.    I was able to see how Monet treated water when it wasn’t sunny out, a condition we seem to experience more and more. 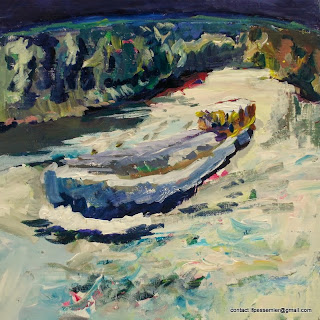 Paintings from the “boat studio” took up a single room.  It made me think how neat it would be to have a boat studio, set up for a couple of painters, with an anchor and life vests.   The expression “may day” unfortunately comes to mind – a French expression, in fact, from the words “venez m’aider”  m’aider, or may day -- meaning  ‘help me’. 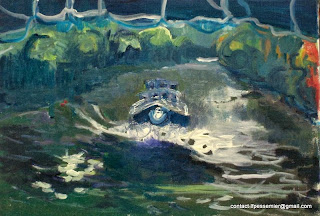 There were two Berthe Morisot’s, of water and boats – she handled the boats more like I would, I hesitate to say “like a girl”.  There were two charming Fourian pictures by the river, which included dogs.  An artist I was unfamiliar with, Delattre, painted sailboats and their reflections that Blair liked, and a foggy day that I liked.   We saw Venice and Giverny, the Seine and the Thames.   There were even marvelous depictions of flood waters. 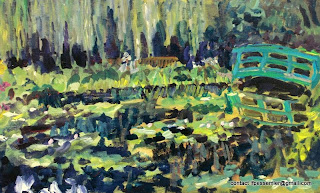 So as not to spoil the effect, we went to lunch at the Maison Blanche in La Bouille, overlooking the Seine.  Blair and our friend had oysters.  Harika and I stuck mostly to the turf.   We jumped back into the car and drove the 45 minutes to Trouville, where we basked in the sunshine by the sea until late afternoon.   We waded in the surf -- Harika even got wet. 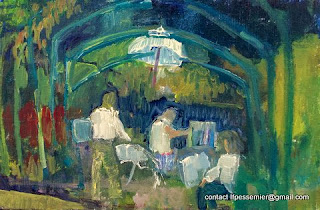 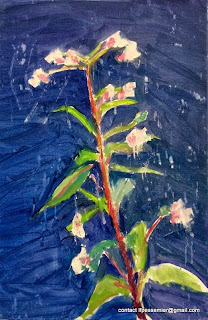 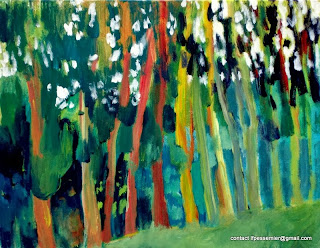 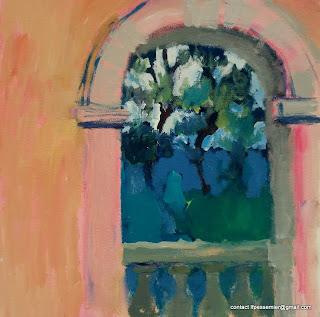 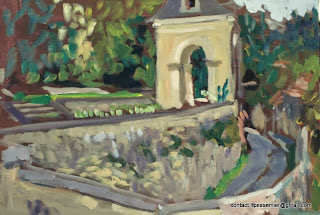 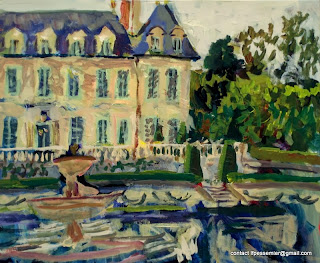 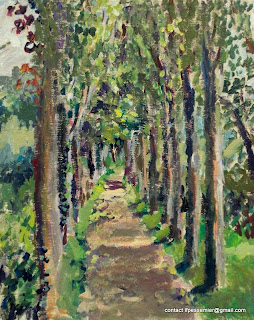 Trees along the Oise  Blair Pessemier   Acrylic/linen  16 x 13
Posted by Laurie and Blair PESSEMIER at 10:17 AM