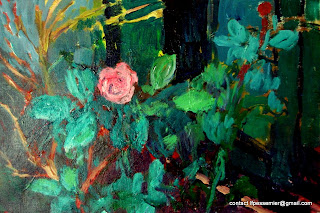 
I only painted one new painting this week  between Monday and Friday, on account of bitterly cold damp weather.  I hope to do something later today while  the sun is shining, but I feel so thrilled with the sunny weather I just want to bask in joy.  Blair has taken up the slack… 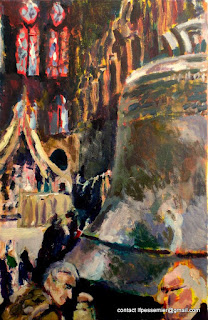 We made a foray to see the bells at Notre Dame this week.  The bells are being replaced in honor of the 850th birthday of the cathedral.  Currently Notre Dame has discordant bells, a result of the events of the French Revolution, when the original bells were melted down to make cannons.    The new big bell, Mary, weighs more than six tons.  The other 8 bells, which make an octave, are named after bishops and such associated with the church:  Marcel, Benoit, Anne-Genevieve (a mere 3,477 kilos) and others.   I gave one a hardy tap, but my hand produced no sound.  The clappers are as large as cannons themselves.   It is a bit of a mystery as to how they will be raised to the tops of the bell-towers, but I will pass by after 25 February, when the moving process begins. 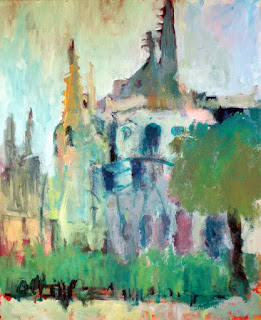 It’s been a year since my “resolution” to write to people via snail mail, aka the Post Office.  I was very weak in this department, but others were faithful,  especially LHH with her beautiful postcards, each one delightful.   What would St. Valentine make of all this?   We are receiving cards and letters from another friend, who doesn’t have email, which makes the written word a more natural choice.   I tried writing today’s artnotes with a pencil, but I have to type them anyway.

I transcripted a skype interview this week that covered this very topic. Ted Nelson, the father of hypertext, chatted with a French scholar about the use of the pencil versus the computer.  The talk circulated around notes and language and the philosophy of getting our creative thoughts from our brain into a finished presentable state.  I am always thinking of this sort of thing with painting, so to hear it discussed in relation to literature was a treat. Plus I got paid.

We’ve been moving bits and pieces to the gallery once again. 14, rue Servandoni  has a warmer feel this time around.  Parts of our  collection of conversation pieces populate the place with interesting “nature morte” scenes.  I am giving lessons beginning Wednesday in painting and drawing – these cold days we’ll work inside. 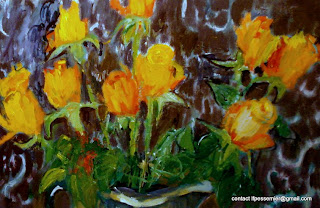 
Other news:    Paris Painting Workshop  (outdoors) starts in a month!   CPK won the contest for signing up the most Artnotes new subscribers:  16!  Thanks to all who participated, especially runner-up CT with 12 names.    So far, my resolution to post a painting-a-day on Facebook has been working (ok, I missed one).   We’re at Studio Pessemier on Facebook.  Tweeting is still beyond my grasp, but if I ever get an i-phone it may become apparent.  The www.StudioPessemier.com site (thank you www.allisonlounes.com/consulting/ ) is operational -- but contact me for prices (retail listed on site).