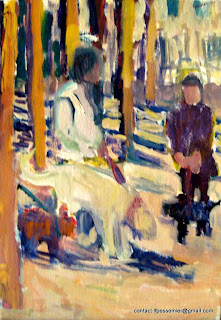 
“There is no bad weather, “a friend quotes her grandmother, “just wrong clothes.”

It was only 22 degrees Fahrenheit in Paris this morning.  Harika embraces this weather like she was born in Siberia instead of Tunisia.   Our only visitors to the gallery, in fact, have been from the more Northern climes, like Russia and the Scandinavian latitudes.  I feel pretty robust about the weather myself, bundled in my furry coat.  Blair and I went out yesterday to scope out a spot to paint a portrait, en plein air, near the Eiffel Tower. 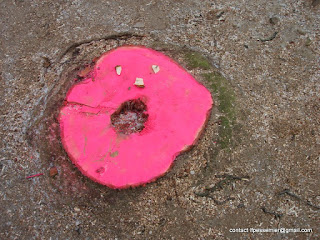 Fifty trees were felled from the dog walking area in the Luxembourg Gardens.  It looks pretty grim, but the trees were diseased -- evidenced by large holes through the limbs and trunk.    I’ve suggested the vacant area, populated by stumps (spray painted fluorescent pink so we don’t trip on them) become a dog park.   We cold dedicate the park to Idéfix, Obelix’s dog, who cries whenever a tree is cut down.   Obelix, Asterix and Idéfix (Dogmatix in the English translation), are Gallic cartoon characters every child in France knows. 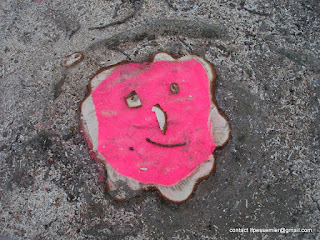 I’ve taken to decorating the stumps with stones and twigs that my dog Harika takes joy in removing.  I’ve better ideas to come, but need the temperature to crest freezing, at least.   Earthworks:  I love it when things evolve. 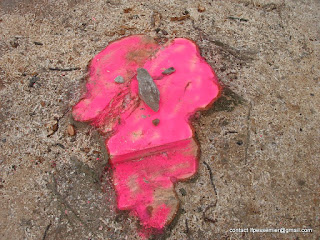 We had an outdoor art lesson this week, fortunately the day before the mercury plunged.   We painted at the carousel, which was garnished with tons of kids on Wednesday afternoon, the traditional afternoon off from school here.   It is the finest day in the park, with everyone from infants to grandparents enjoying the garden.

It felt great to be out, but as the sun crept behind the trees we returned to the gallery/studio, where we spent a half-hour drawing.    Usually, I have a large collection of mismatched gloves suitable for wear while painting, but not this day.    In fact, my student had gloves, but we were beyond the point of no return.

We might have stayed in the whole time, but work is being done on the floor above the gallery, and the workmen have fallen through the ceiling three times.   You think I am joking, but I am not.   There are no precautions being taken for the safety of the workers, or us, as they remove the floor from the apartment above, leaving only the 16th century beams to separate the two spaces.   As long as the outside of the building isn’t breached, renovation work can take place inside without  any permit or restriction.   I wear my hat, as small chunks of ancient mortar/plaster bounce off my head  from above.   It makes selling paintings a little difficult, but traffic is light these cold days. 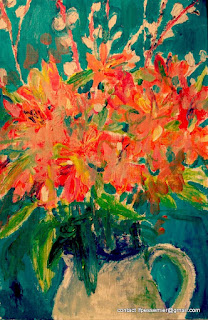 Peruvian lilies with Pussywillows   Laurie Fox Pessemier   Acrylic on linen  11 x 16 inches
Posted by Laurie and Blair PESSEMIER at 10:59 AM