ARTNOTES:  Don't fence me in

For the past two weeks, we’ve been awakened by hammering nearby.  Strange men have been walking by our windows on metal scaffolding, covered with netting.   For the next six months our building will undergo a cleaning.   We’re all in favor of clean buildings, but this puts a severe crimp in my kitchen herb garden.  Our balcony is a little over 2 feet wide and wraps 90 feet around the apartment,  for a total of 180 square feet of extra space.   We’ve brought in the table and chairs, plants, garbage can and recycling bin, and to say we are packed to the gunnels (of our 600 square foot apartment) would be an understatement.

This work isn’t stopping after six months, either.   After that they are going to replace the roof and refresh the inside of the public areas;  finally, the elevator will be replaced, a prospect those of us on the sixth floor dread.  I am trying to take this in stride.   We have a beautiful apartment with a spectacular view, and to think of moving on account of this would be folly.  It has crossed my mind.

The world opens up to me with the idea of moving.  Unlike the other expats here, moving back to the USA does cross my mind:  give me land, lots of land.   But really, while I dream, I might as well look at stepping further out:  Nice, Normandy, or Bordeaux;  Portugal and Tangiers come to mind.  When I unleash my fantasies, I see sunshine blowing through open windows (ok, maybe Normandy wouldn’t be perfect) and barbecues on the terrace.  I imagine opening the door to the street and not having twelve people rush by, nor Harika trying to bite the ankles of the occasional jogger.  In my dreams, Harika could run free and I could tote my canvasses to a new venue.

Last weekend we went with friends to Milly-la-Foret.  (pronounced MEee, despite two  French friends I went with over the years who said milly just like me).  We went to see Tingeuly’s  “Cyclope”, a mouse-trap-contraption, 75 feet tall, with a single roving eye, in the middle of the forest.  I wanted to see Jean Cocteau’s house while in Milly --  I wasn’t disappointed.  The house was full of portraits drawn, painted or sculpted by his friends, mainly of him, and sketches by him for his films and otherwise.  My favorite work, painted by a friend of his, depicted a sphinx and satyr playing cards.  There  was a mirrored stage in the entry, and  a few over-the-top decorated rooms as he had lived in.   A small, almost booth-like room was lined with stills of a woman talking on the phone, while the monologue of his play  “La Voix Humaine” rang from a speaker.   The garden was full of fruit trees and flowers a la Beauty and the Beast, and canals  reflected the sunlight on the ceiling of the rooms inside.

But the thing that impressed me most was Cocteau’s statement that “when he found the house, he found his “cadre” – his framework for living.   I wonder if that is something that remains constant once one finds it, or if it changes with time.  Meanwhile, forays to the country fill me with new ideas.  I plan to put pots of water, bird-bath style on the balcony someday, and cast impressions on my ceiling. 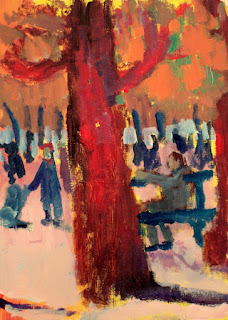 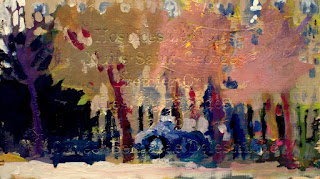 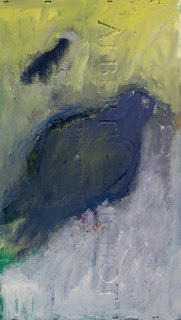 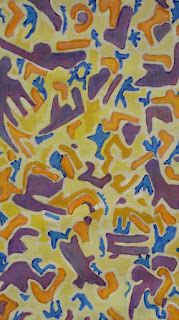 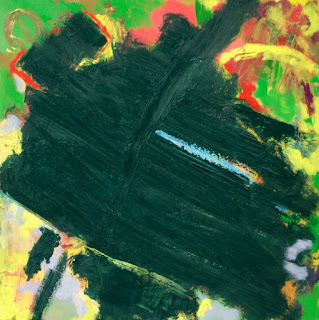 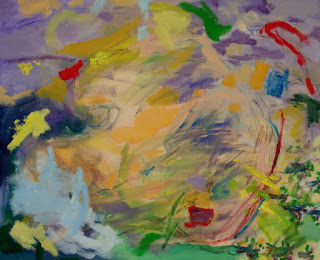 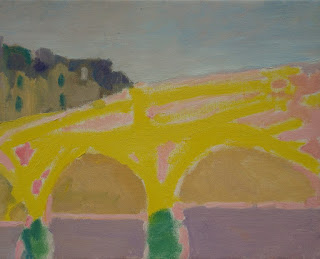 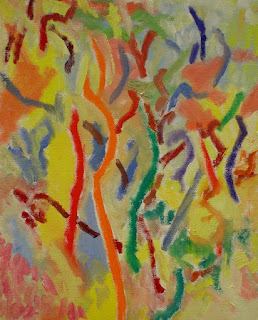 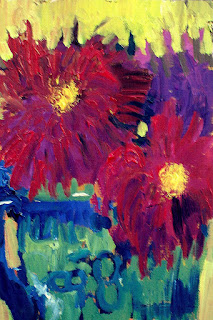 Both artists have a wonderful sense of their subject matter. Whether as an impressionistic creation or a more realistic composition, Laurie and Blair bring their paintings to fruition by a combination of color, stroke, perspective and sheer artistic talent. Blair's "Arbes d'Automne" is a playful fantasy of color, harmony and life: you can almost see the trees dance! Laurie's "Dahlias In A Blue Vase" is a rich tapestry of color, depth and intensity...drawing you in so that you can almost smell the flowers. Thanks to both for sharing their many fine works of art with us all. Dale