A Rainy Week in Paris 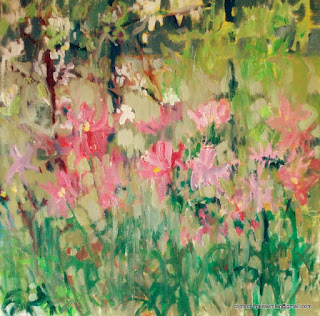 ARNOTES:  A DOG'S LIFE
On Wednesday we received a notice a package was awaiting us at “la Poste”.  We took our yellow slip and on Thursday retrieved our treasure.   And what a treasure it was: two 8 x 10 photos of Harika and Blair and I, taken by a photographer in the Luxembourg Gardens last fall.   Enclosed were forms to authorize use of the photos in “Les Chiens en France”, a picture book by Rachel McKenna to be released in September, 2012.  We signed YES and sent the forms back to Ms. McKenna at once. 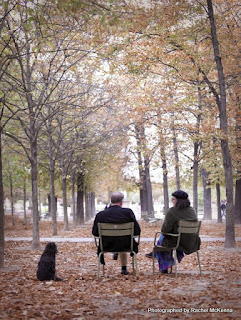 “You’d better not let that dog get too fat,” barked F, walking her dustmop of a dog in the Luxembourg Gardens, today.  “No problem,” Blair told F, “Harika’s going to be in a book you know.”  F bristled and snorted as only certain French women can.  Blair told her about “Dogs in France”.   “Why, she isn’t even a French dog,” F continued, “she’s from Africa.”  By now, other dog owners congregated.  “Excuse me,” I said, “she may have been born in Tunisia, but she has her French passport.”  The crowd laughed and we left F and the dustmop in the dust. (I guess we know who she voted for last election)

Harika and her friends are oblivious to race, creed or political persuasion.  I try to be more like her when it comes to things:  if it doesn’t work out, just walk away and go on to the next page.  I dispense this advice when asked.  Count on a full dinnerbowl.

On the evening of June 7, a friend, with whom we share a mutual acquaintance in California, came to visit from Tehran.    He brought us caviar from the Caspian Sea.   Iran borders on the deepest part of that sea, producing the finest sturgeon and caviar.  I love to think about sturgeon, who can be 150 years old and 20 feet long.  We talk about the opposite of deep or profound:  shallow.   Our friends first language is  Farsi, French second and English third.  We alternated between French and English, but mostly English.  He is actually an American citizen and taught French language in California.   I love America for that.

We went from drinks at our house to dinner in the St. Germaine neighborhood.  We finished with ice cream and awalk along the Seine, reveling in the beauty of the Louvre and Pyramid at night.  The juxtaposition of old and new, in an older form (pyramid) makes for one of my favorite architectural projects.   We stayed up to midnight to wish ourselves happy wedding anniversary:  32 years.

I have been having my doubts about Paris:  only three paintings this week because of poor weather.  But when I walk outside in the fading summer light, after 10 PM, I fall in love with this city all over again. 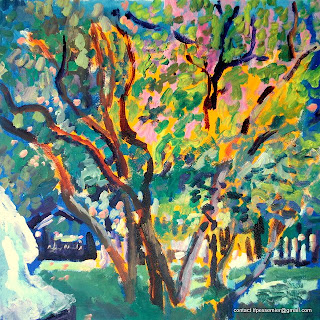 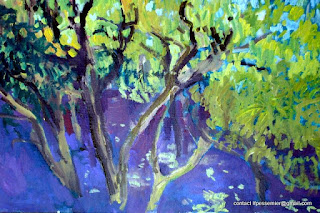 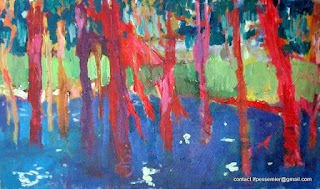