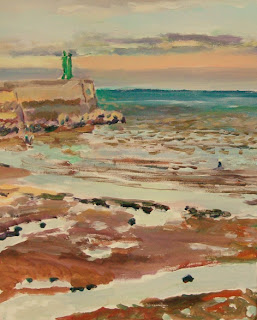 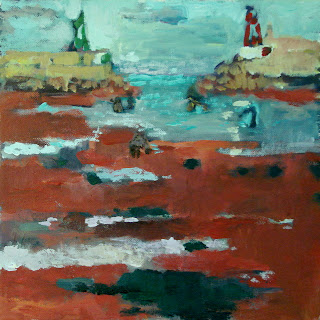 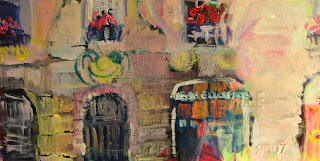 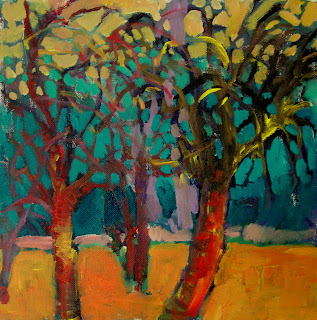 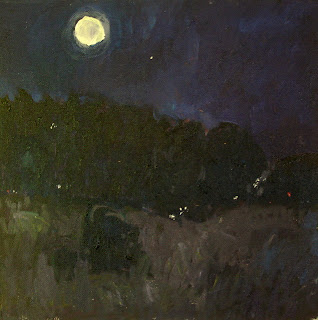 
“Les Marines de Port-en-Bessin” the invitation read, “10 Novembre 2011”.  Blair and I and our old friend Quentin had an expo in Port-en-Bessin in February 2005.  At that time, the museum/cultural center took one of each of our nautical scenes.  And for the next two weeks those paintings are once again on exhibit in this historic World War II town on the Normandy Coast.
We couldn’t pass up the chance to go the the vernissage, the following night.  We rented a car and cast out at 9:30 AM the next morning.   Harika was in complete agreement --  another opportunity to play on the beach.  Whooppeee!
We sat down for a lunch of mussels and lamb chops at a beachside restaurant in Trouville, about 25 miles from Port-en-Bessin.  Trouville has a long, sandy beach, and men were paddling on surfboards as the tide receded.  Harika frolicked on the sand as we ate outdoors.  It was brilliantly sunny, counteracting the nip in the air.   In mid-afternoon we drove West to Port-en-Bessin, where we would paint.
It was the most wonderful day, with a super low tide.  We could see remnants of World War II wrecks, and could walk out nearly to the end of the jetties at Port-en-Bessin.   Men were harvesting pentoncles (bay scallops), with wooden-handled nets.   Some were in giant boots, others bare-legged in the icy sea.
Blair painted from above, but Harika and I opted to sit  by the water.  A short while into the painting we were chased off the beach by the arrival of a pit-bull:   he sent the two of us plunging, me in my good shoes, across fields of seaweed alive with sea snails.  Paints and canvas akimbo, Harika leaping, we made quite a site.    I could imagine the other dog snickering at us from behind.
One half of the beach at Port-en-Bessin  is the scallop-shell graveyard.  The chalk-on-the-blackboard sound of shells beneath our feet results in Blair carrying Harika over the rough spots.  The other half of the beach (on the other side of the locks which keep the fishing boats afloat) is an enclosed bay – this is where we painted.  The light is extraordinary this late afternoon, and the pools of water amidst the sand are mirrors to the sky.
The last time we showed paintings at Port-en-Bessin the Mayor of the town sang the “Star Spangled Banner”, a cappella, in our honor.  He was there again on Thursday night, but we assured him he didn’t need to sing.  He was cheery as ever, but a tear filled his eye when we informed him of the demise of Q.  Quentin was a veteran of World War II, and participated in memorial festivities in Normandy a couple of times.
It was appropriate to be at such an historic setting as the Normandy beaches on the Eve of Remembrance Day.  There are fewer and fewer witnesses to the big wars of Europe.  Museums, cemeteries and cultural centers keep the flame lit.  In Port-en-Bessin this weekend there was a big scallop festival and circus., in conjunction with Veteran’s day.  We left the vernissage early, to drive back to Paris by night.

Posted by Laurie and Blair PESSEMIER at 11:49 AM