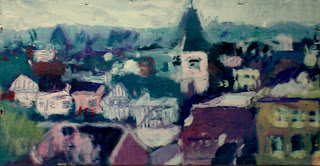 I could never understand why my father would get up at 4 AM, to take a walk, to have a cup of coffee, to sit in the kitchen apparently doing not much of anything.   I now realize that the hours he shared with us, the family, were not necessarily what he wanted to do, what he needed to do.  He needed that extra time by himself, in the early hours, to express himself, to be his essential self.
I am up at 5:30 AM on Wednesday.  We have guests.  I am typing here in the kitchen.  It isn’t that I am unhappy to have guests (I love company!), but I can’t write or paint, or even sit in my chair and think.  I am not plucking my ukulele for Blair and Harika in the evenings… these are all my essential elements.
I can’t paint at 5:30 AM – I am physically and mentally able, but there is no light and I am in a 600 square foot apartment with three other people and a dog.  So, I am writing.  I have been dying to write for the last 48 hours.  Life and adventure continues, and must be recorded:
“Do you think that tire needs air?” I asked my friend.  It was clear the bottom inch of the tire was hugging the ground.  “We have a flat tire!” Blair exclaims when he sees it.  I suggest air.
We were at the rest stop on the A13 just before Rouen.  I had a sandwich and a cup of coffee at “Paul” to fortify myself until we arrived at the beach in Trouville for a celebratory birthday lunch.  The weather was looking poorly, my arms windmilling wildly to keep my balance on the ice outside the car.
We  thlunked over to the air machine with our errant wheel.  I pushed the green button as Blair attempted to fill the tire.  “Is that enough?” I asked, my glasses glazed over in the freezing rain.   We really had a flat tire.
We  telephoned Hertz -- they instructed us to call the assistance number.  Assistance told us to change the tire.  “But there is no spare.”   One half hour later a wrecker, suitable for a tractor-trailer tow, arrived.   “Nope, they don’t even give you a spare tire anymore,” the driver acknowledged as he pulled the car onto the flatbed.   A small man, he had a hydraulic seat that raised and lowered to receive him.
E climbed the two tall steps into the passenger area, as I lifted Harika over my head and into the cab of the truck.  I hoisted myself up and awaited the trip to the garage, a good 30 minutes hence.   It was becoming clear the best laid plans for the seafood platter at the restaurant on the beach were for naught.   Two hours later, after the tire was plugged, and we said our goodbyes to the garagist, we decided to eat lunch in Gaillon, our current locale.
The city of Gaillon was founded at the end of the 9th century.  Rollo was the first Viking chief here, holding back the French forces.  Gaillon was the scene of a major battle between Richard the Lion Heart and King Philip II Augustus of France 200 years later.
The chateau at Gaillon, as we know it now, was built in the 16th century.  After our lunch, we decided to explore the property, and we walked and threw snowballs at the giant stone structure.  Harika ran around wildly, and I slid down the hill on the back of my jacket.   Blair and M couldn't resist and did it, too.
Even though my mother (in memory care) and my sisters and I are no longer living in the same house with my father, he continues to rise before 5 AM.  He exercises, has his coffee, looks at the news before his day really begins.
Blair and I and our guests  go out to see the holiday windows at the Galeries Lafayette and Printemps on New Years Eve, before setting in at Concorde with people from every corner of the globe.  It is a mild midnight, with the Eiffel Tower sparkling.  The Russians open their champagne a minute before the event, just to be sure they are the first.  On the way home a group of people from “all over” hand us poppers and sparklers and we light our way home.
Posted by Laurie and Blair PESSEMIER at 4:46 PM