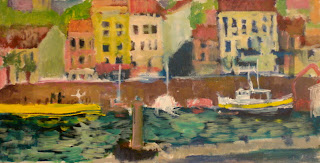 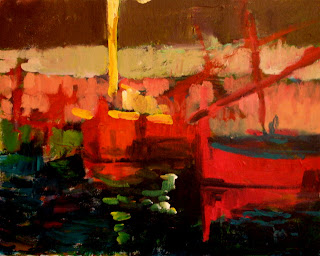 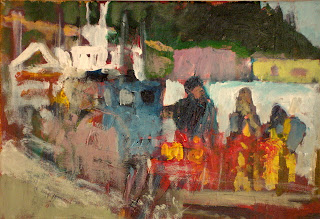 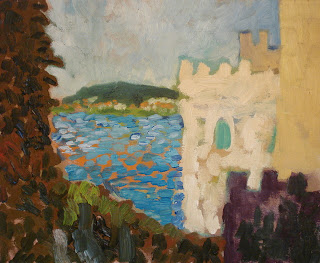 A thousand birds are perched on the edges of the airplanes parked at a large aeronautical manufacturing plant in Toulouse, France.  It is as if the planes are the “Buddha” and the birds are flocks of the faithful.  They want to be close to their leader, the BIG BIRD.   The birds (all breeds) jockey for position, atop the wing or mainframe, ultimately seeking that spot on the crest of the tail.
We jockey for another position ourselves:  we are at the wrong building, and must drive another few minutes to find the site of Blair’s appointment.   Luckily we started out  early.  We stayed overnight in a hotel near the airport – Toulouse is seven hours from Paris.  We will continue on later this day for a weekend at the Mediterranean, just two hours away.
Our friend Francois, in Paris, asks about what we do, our future.  He says we are just like birds on a twig, singing beautifully for a short time on that twig, but later all that remains is the trembling of the twig after our departure.  At first I think he is saying we are “fly by night”, but with greater consideration, I realize it describes our life.   We are just “us two”:  never really sinking our roots very deeply into the ground.  Like perpetual children, we are always seeing life for the first time.
A woman I met at a recent coffee klatch bemoaned her new life with her husband, in Paris.  She imagined, at 55, she would be enjoying her "established" life and home in Washington, DC, not having to adjust to new things.  "Look around", I told her, "we're all so young.  Change keeps you alert, vital."  We exchanged looks of wonderment.
We drive to Collioure on Thursday afternoon, arriving as the sun sets over the vineyards.   We rent a cheap house for the weekend, situated on three floors overlooking the city.  Blair paints (hooray!) from the window, and I walk downtown to paint the trees in the morning sunlight, the Moorish boats in the water.  Our house is cold, with terrazzo floors, and I am warmer outside than in.   We buy a chicken at the store to take to the waterfront at Port Vendres for picnic.  Harika revels in the sand and water of her ocean, the Mediterranean.
I see unusual birds as I am painting the vine-covered hills between Port Vendres and Collioure – there are about 10, flying like swallows, in formation, but substantially larger specimens.  They are black and white.  I long for a bird book, or an informational sign:   the town is scattered with “frames” through which one views a famous scene painted a century ago by Derain or Matisse, but no news about the fish in the sea or birds in the sky.   We get up super-early, and drink coffee in a café populated with old men telling hunting stories.   Harika joins in.  I am tempted to ask them about the birds.
There was a time Blair and I considered moving here, to Collioure.  It is a painter’s paradise, with marvelous light, as you might see in our paintings.  These towns lack the depth of Paris, however, or maybe the residents are just not as profound.  Many branches quake from the changeover of weekly rentals on Saturday morning, to the jingle of coins.
We will take our leave on Tuesday, stopping at Nohant to see George Sands’ house: Blair has an appointment nearby.   I am looking forward to lining my winter’s nest in Paris with beautiful colors.
PS.  I think the birds might have been migrating Mediterranean Puffins.

Posted by Laurie and Blair PESSEMIER at 7:50 PM