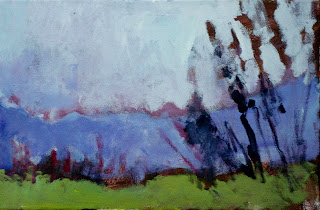 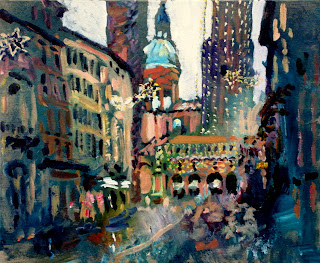 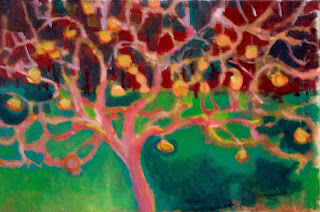 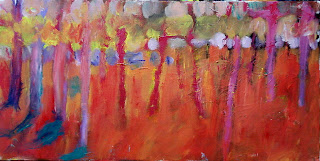 Spaghetti.  Tortellini.  Ravioli.  Taglietelli.  I ate all kinds of pasta in Italy, in Modena, Pistoia, Bologna…  Imagine gorgonzola tortellini with a big glass of fizzy red wine in a café at 11:30 Sunday morning.  Heaven.
We spent last week in Italy, with an American friend who just rented a large villa there.  We christened the house, built in 1524, with many dinners and cups of tea in a chilly kitchen.  It snowed more than six inches, and I painted the Leonardo da Vinci landscape with and without  snow.
A seven hour train ride from Paris, we arrived in Milan.  The speed of the TGV is finished at the Italian border, where we pick our way through the countryside.     The Milan railroad station is  an art deco mishmash of styles  -- still it is of a breathtaking scale and I feel as though I’ve “arrived” when I get there.  Harika is thrilled to bounce out of the crowded car.
We drove up to the mountains after a fortifying dish of ravioli “en brodo” and boiled beef with green relish and bread.  I felt like a new person as we made the 75 minute trek from Castelfranco to Vergato.
We took a number of short jaunts from base to nearby attractions.   We traversed the mountain pass before the big snow to visit Pistoia, a Florence-like city in Tuscany.   I ate taglietelli with endive and orange peel.  The baptistery was of the famous dark green and white stripe marble motif.   The agriculture, the terrain, the architecture all changed from Emilio-Romagno to Tuscany.  Palm trees, and large building overhangs heralded our arrival in “sunny Italy”.  It was clear to me how Italy retained its sovereign “city-states” clear up until its unification in 1860.
We decided to make a trek to the Adriatica:  what would vacation be without the ocean?  It was the deep blue-turquoise which one associates with Venice.  We drove around Rimini seeking the Malatesta temple, but never found it.  We drove up the coast, Harika playing with a number of Italian dogs on the beach, to see St. Apollinaire in Classe, a Byzantine cathedral from 549 CE.  It was impeccably restored, with gold and glass mosaics of sheep and the sky:  happy motifs before the punishment phase of Christianity.    I could hardly believe someone stood and looked at the same marvelous art as I was,  1461 years earlier.   Before Columbus, before Ghengis Kahn, before Charlemagne,  before Mohammed; I might have looked like a giant, but would have been dead by 55 surely.
The highlight of our trip however, was our visit to Bologna.    We parked the car in a no parking zone, and both painted the downtown tower in illuminated regalia.  With the windshield wipers on “mist” we painted lights of the town before us.  Our muses satisfied, we parked the car in earnest and continued on foot to the Christmas fair booths.   The NOUGAT booth was the most impressive, sugary delights in all colors and flavors from orange to limoncello to nuts.  The foaming cakes sparkled, as people lined up to purchase.   Blair and I went for the Christmas light stand.  While most strings were 3 to 5 Euros, the man quoted Blair 45 for the one we selected; it was just too much thievery to even approach a bargain.   We continued on, admiring the animated figures for the crèche, the pizza man perpetually inserting and extracting the pizza from the fiery oven.   We walked with Harika, eventually turning into the Café Accademia for pasta, wine and coffee before noon.
We returned next day, through Milan (in Lombardy), enjoying an Italian “cafeteria” dinner.  At midnight we pulled into Paris, where we will spend the remainder of the holidays.
We’ve had two sets of guests since our return three days ago.  From America, France and Iran, they bring us bits of culture we otherwise might miss.   Travel is good, but I equally like what travelers bring to me, a new outlook in the comfort of my own room.
Posted by Laurie and Blair PESSEMIER at 6:21 PM