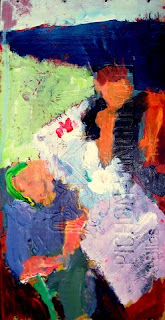 ARTNOTES: The HOTEL you would BUILD

“...the hotel you would build for yourself if you only knew how “ is how the Tribune described The Hotel Lloyd in Amsterdam. And they seem to be right.

We originally booked this trip, part business, part celebration of our 30th wedding anniversary, at the Hotel Filosof. But when we called to confirm our reservation, with Harika, they said they changed their policy: no pets. We’d stayed there before, with Blackie, Q’s dog. So two days before the trip, on Hotels.com (no refunds), we were able to change the booking to a dog friendly joint.
The Hotel Lloyd is a 1,2,3,4 and 5 star hotel and cultural embassy. It makes for a marvelous mix of folks, from us, on the one-star floor, to the rich and famous, all sandwiched together with fabulous artwork (the cultural part).
The ruins of a house from an island off of Montevideo, where some of Holland’s earliest immigrants hailed from, stand in the dining room. Handkerchief pictures, printed on handkerchief linen, wave in the breeze in the six story atrium: this, about sorrow and the lent/easter/pentecost season.
The building itself is super-neat: it was built in the 1920s to house emigrants arriving in the docklands of Holland on the Lloyd line. It is a grand-scale brick structure, with large opening windows. On the backside, the wavy glass still remains in some of the windows, that don’t require sound-proofing.
We look out on a very large canal, and a tram passes over the bridge. Across the way is a rehabbed warehouse building, brick, with its feet directly in the water. Nearly 24 hours into the visit, I haven’t left the neighborhood. (afterward, I learn of a great restaurant, walking distance; oh well, next trip)
Blair is here for “Powergen Europe” a show of energy companies. My involvement with his work is limited, so I stay at the hotel and paint. Three paintings today, not large – I really like them all. Northern light: it stays light out until well after 10 and brightens again at 4:30, but even in the day the light vibrates.
Harika and I eat grill-worst sandwiches by the water where she intimidates the ducks. We are both slightly intimidated by the bicycles here – I have seen what seems like a thousand during my visit. What a wonderful way to get around this flat city. My favorites are the ones with the wheel barrow front for the kiddies. Harika cringes as dogs, on leash, run alongside the bikes.
There are snacks on the counter, real Spanish-tapas style, in the hotel dining room here: 1.50 each. Last night we ate a whole sea bass for dinner. A fig tart, four cheeses…
At the PowerGen show here today Blair played a slot machine at one stand. He pulled all diamonds, and a big fat diamond (with the name of the company emblazoned) popped out. “Happy Anniversary” he beamed.


Posted by Laurie and Blair PESSEMIER at 9:31 AM