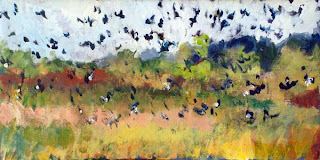 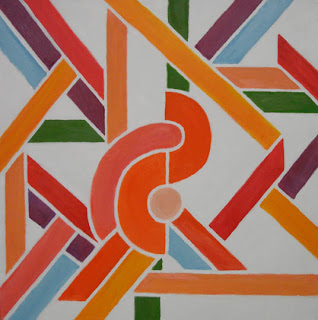 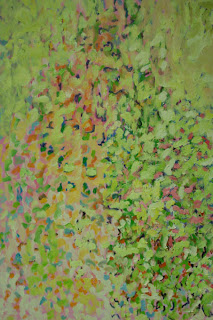 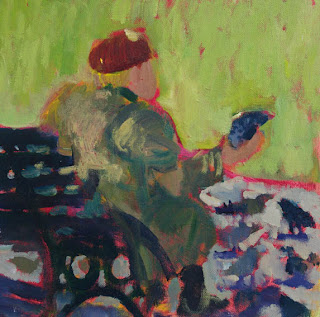 I wrote a letter to God this week, asking for money. I told him that I would do only good with it, not be selfish, and it would mentally free me up to write artnotes once again. So far, no response, but I thought I’d go ahead and write to you anyway. It’s hard to find the balance between doing what I know to do (art and writing) and finding the money with which to live.
It has suddenly become cold crunchy fall here in New England. We had less than a month of summer weather, and now the first brush strokes of gold and red are painting the trees. Yesterday, we drove to Williamstown, Massachusetts to see the Prendergast show at Williams College. Several students were wearing their winter coats.
We picked up our friend, B, who lives in Winsted, and proceeded up the old route 8. About fifteen miles out, I saw a large black form crossing the road. “A bear!” Blair exclaimed. Just then, two small heads popped out of the foliage “and her cubs!” B took out his camera at the moment Harika went into orbit. A dog that has fear of chair legs decided to do her best to ward off these wild animals. No cub pictures, but a rather nice picture of the mother bear returning across the street to retrieve them. I could smell her. We drove on, by old New England barns, a covered bridge, and summer hotels. We also saw a fox.
Prendergast is a painter I have much enjoyed – he almost always includes people in his pictures, often lots of them. These paintings were mainly from Venice and northern Italy. Watercolors and monoprints, it was a collection that merited close up study. The galleries were not crowded and we got a good look at all of them.
I go to museums because I love to look at pictures, all kinds. The Robert Motherwell (in the permanent collection) has an impact equal to the Dutch portraiture and the Edward Hopper. In fact, seeing the Declaration of Independence was thrilling, and the British reply to the Declaration.
Our friend concentrated on the rest of the museum, which I had never seen. “Come over here,” he beckoned, showing us a Grant Wood which seemed quite modern, painted on masonite. Blair and I like to go places with other people for this very reason: they see things we overlook, adding a whole other dimension to our experience. B pointed out Steichen’s photos, some taken as advertising in the 1930s. A picture of matchsticks was destined to be a pattern for a Swiss Silk textile; same with an abstract of eyeglasses. The art museum is a great common ground, for friends and others, to start conversation.
We three were all shaken up by a photo seen at the end of the exhibits, before the gift shop. It was of a man in native dress with a pet hyena, standing under a graffiti-ed concrete bridge in Nigeria. Oddly, it is the piece that has stayed in my mind the longest, but the name of the artist escapes me (as I hope the hyena eventually did [escape him]).
The museum was free, perhaps a sign God heard my prayer. Good, but I still await more substantial income.
I don’t write artnotes when I am too stressed out, or have nothing positive to say, but then I reach a point where the dam breaks. I want to tell you dear readers (who are so supportive) that I didn’t get accepted to graduate school in Istanbul. The university thought their curriculum wouldn’t sufficiently satisfy my interest in art history. This was better than simply “no”, I guess… I might just have to write about art on my own.
Posted by Laurie and Blair PESSEMIER at 10:50 PM